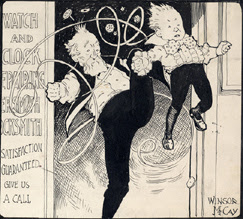 "Little Sammy Sneeze" comics by Windsor McCay 1904-1906, New York Herald
I've been looking for a new art book to buy for Xmas. This might be the one. Lloyd just reviewed it on Mardecortesbaja . It's a collection of Winsor McCay's comic strips that appeared before "Little Nemo in Slumberland". The book is called "Little Sammy Sneeze". It also includes an intriguing sister-strip called "Hungry Henrietta". The "Little Sammy Sneeze" strip is about a boy who ends up sneezing violently in a variety of settings. He ultimately gets kicked out or punished by the people who are unfortunate enough to get caught in his explosion. “He Just Simply Couldn’t Stop It” and “He Never Knew When It Was Coming.”