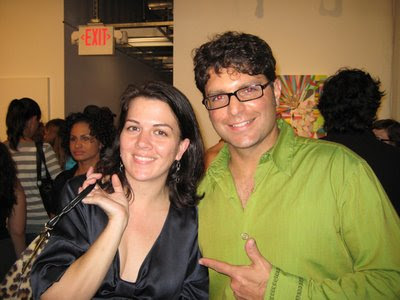 Kirsten Anderson (Roq la Rue) and Mark Murphy (Murphy Design), photo by Jeff Soto
Jeff Soto is currently blogging about his visit to Miami Basel this year. He was part of the Scion project. Here is a photo he took of the lovely Kirsten Anderson and the dashing Mark Murphy at a party. There are other photos of the works in The Know Exhibition (Murphy's booth at the Art Now Fair). It looks nice! That's the show that I was part of. It looks like everyone had a lot of fun. Check it out:
Jeff Soto's Blog
P.S. Jeff also has photos of the GREEN Show in Santa Monica, CA at Robert Berman Gallery on his blog. The GREEN show is up until December 22, for anyone in the L.A. area who missed it. That's the exhibit with my "Deja Vu Waltz" painting in it. Thanks, Jeff, for blogging about the two shows. Murphy offers a 2008 calendar of Jeff's art here: Murphy Design .
The Art of Amy Crehore
Posted by Amy Crehore at 8:20 AM