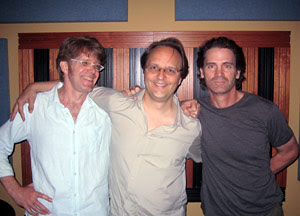 Dubway Owner/engineer Al Houghton, Marc Farre, Dubway Co-Owner/engineer Mike Crehore
It looks like Dubway recording studio in NYC has a new website and it's really nice. I was just checking out the "news" page. There are mentions of Patty Smith, Nora Jones, Janet Reno, Kate Hudson, Whoopi Goldberg to name a few. Dubway Studio records and tweaks soundtracks for films, television, and animation. They also do a fine job recording singer-songwriters. Nickolodeon's Backyardigans, a children's animated feature, depends on Dubway for it's sound. He ain't heavy, he's my brother! Mike Crehore is co-owner of Dubway and he is also a great guitarist. Al Houghton is his partner in crime.
Have a look at their cool website:
DUBWAY Recording
The Art of Amy Crehore
Click "vote for me" if you like my blog.
Posted by Amy Crehore at 5:01 PM