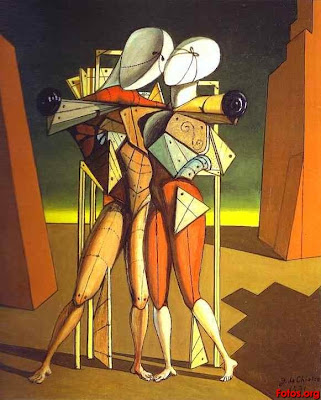 De Chirico before 1918
Who said that artists only get better with age? Giorgio De Chirico (1888-1978) is an example of someone who created his most poetic, alluring and convincing art before the age of 30. In the 60 years after 1918, he struggled with a classical switch in style and subject matter that never quite made it. (He even ended up "forging" some of his own early metaphysical works in the 1940'-60's when he needed extra money.) He wanted to paint like Titian, but it was his early, more modern style that caught on. It was a unique language that easily lent itself to mystery, metaphor and moody depictions of surreal objects/buildings in stark landscapes. The classical style that he later adopted, with it's mythical bent, did not. He lost his way for the rest of his life, but stubbornly held onto the notion that his work was only getting better. I can understand his desire to really learn how to paint more academically...using more than just the flat, colorful symbols with heavy black outlines that became his trademark early on. However, he had to start over and he never quite got to where he wanted to go. The later works simply don't work. They never became "classic". But, his early works are classic and the drawing is much stronger and so is his imagination. Life is full of irony.
Read essay by Robert Hughes
The Art of Amy Crehore
Posted by Amy Crehore at 2:04 PM

Another artist who went downhill was James Ensor, ironically, as his acclaim grew.