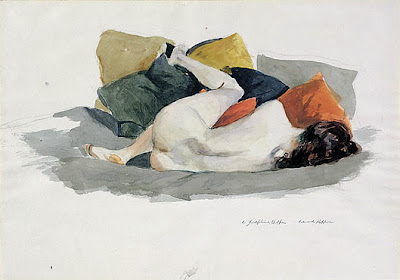 Edward Hopper 1924 Watercolor -Whitney Museum
I like this watercolor that Edward Hopper painted for his wife, Jo, shortly after he married her. He used his wife as a model for most of the female images in his work. This one is particularly nice- it is very feminine and relaxed, unlike some of his oils which seem to have a certain masculine tension about them. It seems that he struggled with the female form. But, I love Hopper's stark American landscapes -hotel rooms, trains, lobbies, theaters, NYC buildings, and houses in natural settings. He is a true American Icon himself and that is what he painted- iconic American images. His favorite teacher was Robert Henri and that tells me a lot right there about the man. He was also a magazine illustrator and teacher himself before he took up painting full-time.
Here's an interesting website:
An Edward Hopper Scrapbook
compiled by the Smithsonian.
The Art of Amy Crehore
Posted by Amy Crehore at 10:13 AM