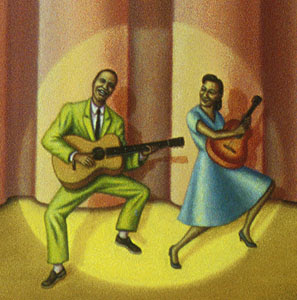 "Yanna's Donut", cover image from a cassette of Hokum Scorcher's music
I have a new song on my music player now. This one is called "Stamps Blues". We got this song from the Tony Hollins' version, 1941. Lou is playing the National guitar and I am playing the washboard. We both sing on this one. We recorded it in 1995 for a little cassette we made called "Yanna's Donut" (Chimborazo Records).
Scroll down to hear the song- here:
LINK

The Art of Amy Crehore
P.S. The songs are changed every Sunday nite, so it will be a different song on the player by the time you read this.
Posted by Amy Crehore at 6:00 PM