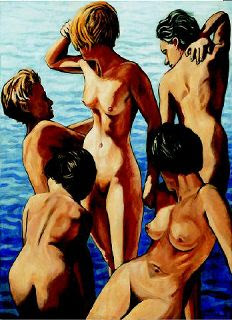 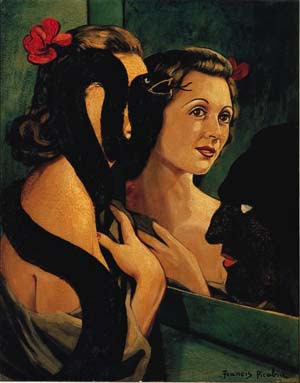 The photo is of Francis Picabia in the film Entr’acte (1924)wearing a dress. Also, here are some examples of his figure paintings of women. "Francis Picabia worked across a huge range of media, from painting and drawing, to poetry, publishing and performance. Born in France he worked between Paris, Zurich and New York at different points throughout his career and was variously integral to and then disassociated from both the Dadaists and then the Surrealists." link
"In the early 1940s he moved to the south of France, where his work took a surprising turn - he produced a series of paintings based on the nude and glamour photos in French "Girlie" magazines, in a garish style which appears to subvert traditional, academic nude painting. He loved fast automobiles and was reported to have 150 of them." Fast cars, cross-dressing and painting more than one woman together based on girlie mags. I sort of like the style of some of his figurative work. However, some of it is clearly lacking in feeling, depth and compositional flow from heavy reliance on stock photos as a reference. Still, he gave painting a good ol' try, when he wasn't being an asshole playboy.
Francis Picabia

Thank god, he didn't paint Mama and Baby Woogems in his later style.