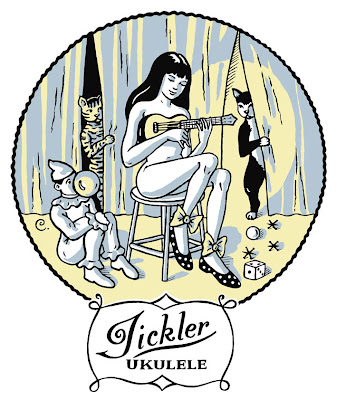 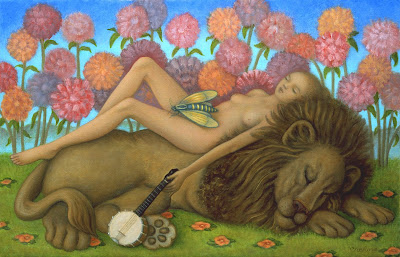 CLICK IMAGE TO ENLARGE
I have some new signed, limited edition prints of my recent paintings available on my website. LINK How would you like to win the print shown here, plus a Tickler Ukulele t-shirt (top image)? All you have to do is write a clever limerick about this painting and leave it in the comments section of my blog. Here is an example of a limerick . Remember, it has to be funny. You might want to give a silly name to a character and take it from there....for example: "There once was a lion (or girl) named__________".
On Sunday, at 6pm PST, a winner will be chosen.
Posts using foul language will be deleted!
Double entendres are encouraged, however. Be clever and funny, people!
The Art of Amy Crehore

a bee, a girl, and her kitty,
sang a naked banjo ditty.

they romped for a while,
and collapsed in a pile.

captured in paint, tired but pretty

I knew a thin girl with a banjo,
Who liked to take naps in the Congo;
She'd pack up her bags
With soft hokum rags,
And lie down until she felt mellow.

Upon further consideration, a minor EDIT to the last line of my limerick is very necessary:

Limerick contest! Awesome! It just so happens I wrote a bunch of limericks the other week...

There once was a woman name of Annie,
Who was blessed with a mighty big fanny,
When she found a nice bloke,
To give it a good poke,
He would find she was also a tranny.

There once was a man who loved mustard,
He'd put it on eggs or in custard,
But when dousing a wiener,
It would change his demeanor,
He'd light up bright red and get flustered.

There once was a woman name of Ann,
Who was blessed with a glorious can,
When she found a nice guy,
To give it a good try,
He would find she was also a man.

Two men got liquored up good and tight,
And proceeded to get in a fight,
Their thrashing on that day,
Was so great that they say,
They woke up on the previous night.

There once was a woman name of Bela,
Whose huge ass would jiggle like jella,
When she found a man,
To give it a tan,
He would find she was also a fella.

There once was a villain named Clyde,
Who yearned for a maiden he spied,
He thought "In order to stick her,
I've heard that liquor is quicker,
but faster is formaldehyde."

mrmonkey23 said...
This comment has been removed by the author.
2:40 PM

Ah, but none is about that painting, so I lose!

I'm just not that clever but I love your artwork! =)

OK, here's a more appropriate one...

A mysterious lady from the east,
tested if music would calm savage beast,
it worked too well it seems,
they both fell into dreams,
and the charmed monster awoke to a feast.

When a Nymph takes a nap on a whim,
knowing Pan's endless hunger for trim,
she prefers a guarded bed:
a Lion's mane under her head
and a wasp o'er her quivering quim.

A pair, asleep on the green
Felt a bee as a queen does a pea
Fresh love sprung from a buzz
So neither cared who it was
Unstrung, they continued to dream

A girl on a lion sleeps
And a fly on her body meets
a nice place so it can rest
and do what it does best:
to play some ukulele licks

When Tarzan lost interest in bed,
Jane would favor a Lion instead
Singing sweet lullabies
With a bee 'tween her thighs
'Till they purred like two kittens well-fed.

A Lion I, but bare is she.
I bear her lain, wishing to see
the magical spot
that makes boys so hot
but, therein lies the bee.


On the lion, she lays sighing.
A sting would surely leave her crying.
Killing the bee with a smack
will make her a lion's snack.
To say otherwise would surely be lying.

Sleeping bee, girl, lion for a manger,
these hurts poised to affect any stranger.
Except for the uke,
which seems quite a fluke,
the rest are assuredly certain danger.


In the garden, she lay sleeping
all the while a bee was peeping
past her private parts.
Not ruled by mens' hearts,
his interest, the flower nectar seeping.


There once was a maiden who'd rest
All day in the garden, undressed.
When I went down to see,
I got stung by a bee,
Who then lay 'tween her thighs, wings abreast.

There once lion named Fred
who was used by his girl as a bed.
He believed she was true,
or at least, wanted to,
though when sleeping, the bee'd give her head.

While the King and the Princess were dozin'
For a moment it seemed time had frozen.
While the Bee keeps a watch
on the Princesses' crotch
I sure hope that my limerick gets chosen.

A banjo she'd found in the attic
Had rendered the lion ecstatic.
As they dozed on the lawns
A large bee claimed her mons.
Ah yes, this could be problematic.

Christine ceased her wild banjo playin'
The creature's insomnia allayin'.
A large bee came to buzz
In her thicket of fuzz.
Was it weird? I don't know. Im just sayin'.

"With my wasp and my banjo," said Betty,
"I have conquered the wild Serengeti."
So saying she'd lay on
A lion she'd play on
And dream she was Tina Rosetti.

"How dear, "said the maiden, "He swooneth.
It happens whenever I crooneth."
It was right at this juncture
She felt a sharp puncture
For that bee was sure one opportuneth.

When the Muse got especially hot
she did take a Big Cat for a cot
'till his purrs did affect her
to yield succulent nectar
from the combs of her sweet Honey Pot.

"A lion is furry, not scalay.
A banjo is no ukelaylay.
But while you're splitting hairs
I hope you're awares
That a big bee is on my va-jay-jay."

In the sweet afterglow of Coitions,
they napped in the strangest positions.
For a lion it's normal
to be so informal
But bees rarely sleep with musicians.


The animals dreamed with their sweetie
Content in the vast Serengeetee.
Said Gaugin with a moan
“Had I only but known,
I would never have gone to Tahiti!”

As she slept in the African veldt,
A curious tingling she feldt;
With her hybrid uke-banjo
And bong full of ganjo
Whilst a bumblebee grazed on her peldt.

Said Goldilocks, she of the yellahair,
“This lion is my kind of fellah fair. ”
But “A Bee in the Bush
Is worth Two in the Tush”
As anyone plainly could tellah there.

A young music student named Doris
Often played for the King of the Foriss.
After each serenade
They would doze in the shade
While a bug tried to find her clitoris.

A young girl once had lion tresses
which kept her from wearing her dresses.
She frolicked and played
and with her he stayed
for the banjulele skills she possesses.


A lion, a witch, and a wasp rode
to a flower bed green where they showed
what it means to be lazy
amidst all the daises.
The only work done? It was banjo'd.

Dorothy teased, "Tin Man, come to my bed"
Kansas girls can sing whilst we give head!"
Answered he, "You're a cutie,
But I'm miffed by your cootie
So I'll go with the Lion instead."

oops, someone left this one in "Vintage Japanese Book Covers"-

There once was a girl from Poughkeepsie,
who smoked weed and drank beer to get tipsy,
then she sketched a vignette
of a napping nymphette,
a pastiche of Rousseau's Sleeping Gypsy.

TightLikeThat - that's your best one yet!

Here's one that was left on my facebook page by David G:

A lovely musician named Joan
Would greet passing boys with a groan
So she brought out her pet
As a live basinette
And now passersby leave her alone!

At 6 pm pacific time, June 28 (tonight) I'll close this contest.
It will take me a couple hours to read through them all and decide. I will post the winner on my blog when I do. If you are the winner, be sure to email me with your contact info.
Thanks!
I'm thrilled with them all
and it will be hard to decide.
xx
Amy

A Lion a Lady and a Bee
declared their love quite openly
they did not try to hide it
they cared not who espied it,
for they loved one another quite passionately.

A gal decided to lay,
with a Bee and a Lion for the day,
She did it with trepedation,
for it ruined her reputation,
but as menage a trois's go, it was okay.

There was an artist called Amy,
who painted pictures quite risque,
a lion, a bee,
a naked girl, plain to see,
though she hid some of her parts with a ukelele.

I'm going to lie down now

"When my lion is in a high dudgeon,
I use my banjo, not a bludgeon.
The result is just bang-up
without all the hang-up
And then he's not such a curmudgeon."

Though some people might call it heretical
The artist was unsympathetical
To cross banjo with uke
Maight make some people puke
But we think it's very aesthetical.

The winner was posted this morning
here:
http://amycrehore.blogspot.com/2009/06/winner-of-my-limerick-contest.html

there were also three runners up
Please get in touch.
amycrehore@hotmail.com