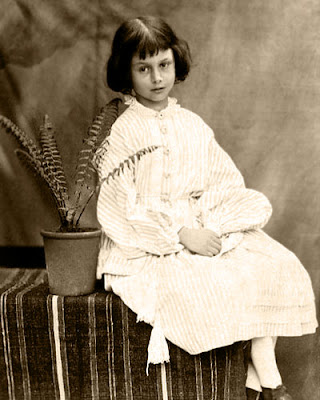 Alice Liddel, photo by Charles Dodgson (Lewis Carroll) 1860
I was just looking at a book of photos by Lewis Carroll, "Dreaming in Pictures" (put together by SFMOMA and Yale University Press). The pictures are mostly of children and they are exquisite, representing the early days of fine art photography. He didn't just photograph Alice Liddell, as shown above, but many children in groups and costumes. Getting them to sit still was a feat and he managed to do it by having them relax into sleepy-type poses which made his photos quite dreamy and artistic.
Today, Tim Burton's upcoming film is in the news. In less than a year, a new movie called "Alice in Wonderland" will be in theaters. Here's a first look at the beautiful sets for that film. It sounds like it will be a sequel to the story, with a more grown-up Alice re-visiting Wonderland. Lewis Carroll and his Alice will never cease to inspire others. LINK:
USA Today
The Art of Amy Crehore
Posted by Amy Crehore at 10:23 AM