Winner of My Limerick Contest 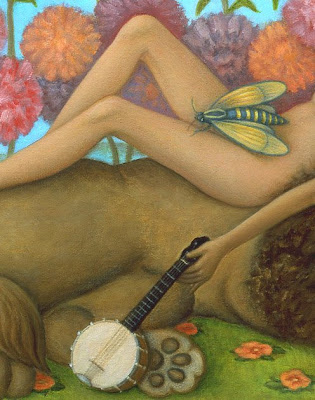 Detail of painting by Amy Crehore 2009
It was really hard to choose a winner from so many good limericks!
That is why it has taken me so long to decide. Anne Marie won the big prize with a couple of great poems. But, Digital Misfit, Treplovski and David G are runners up and they will each get a little something in the mail from me. Please drop me a note with your address, if your poem is posted below.
amycrehore@hotmail.com
Anne Marie wrote:
There once was a lion named Fred
who was used by his girl as a bed.
He believed she was true,
or at least, wanted to,
though when sleeping, the bee'd give her head.

A banjo she'd found in the attic
Had rendered the lion ecstatic.
As they dozed on the lawns
A large bee claimed her mons.
Ah yes, this could be problematic.
David G wrote-
A lovely musician named Joan
Would greet passing boys with a groan
So she brought out her pet
As a live basinette
And now passersby leave her alone!
Thanks to all for participating! There are some really creative people out there. It was a lot of fun reading them all!
The Art of Amy Crehore
Posted by Amy Crehore at 7:08 AM

Hi woodshed-
If you know Anne...plese tell her to get in touch with me. :)
amycrehore@hotmail.com