The Romantic Sexuality of Surrealism 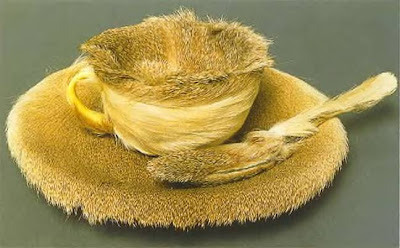 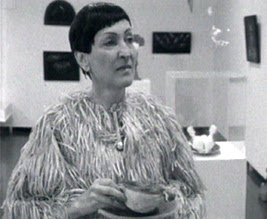 Meret Oppenheim holding a furry teacup in a furry outfit 1967
Robert Hughes wrote an article for the Guardian last March (as a review of the surrealist show at the Victorian and Albert Museum) about the romantic sexuality of surrealism. He went on to talk about the creation of sculptural objects that had a significant influence on design and fashion. Of all the objects one remembers, it is Meret Oppenheim's furry teacup and here is how the story went:
"The most famous of Oppenheim's works was Object, 1936, which grew out of an accessory design she had done for that principal patron of surrealist "thing-making", Elsa Schiaparelli. For the brilliant couturier, Oppenheim had done a gold metal bracelet covered (on the outside) with beaver fur. She wore it to meet Picasso for drinks at the Café de Flore, and Picasso remarked that if you could have a fur bracelet then practically anything else could also be covered with fur, and so transformed. Why not a coffee cup, for instance? So Oppenheim went right ahead, with cup, spoon and saucer, and the result was one of the few really sublime sexual images of the 20th century. It compels you to imagine raising this furry cup, wet with hot fluid, to your lips; it offers no possible meaning other than cunnilingus; it is exquisitely graceful and inescapably direct, both at once, and if ever a single work was enough for one artist's career, it is Oppenheim's cup."
Read more of this fascinating article by Robert Hughes here:
L'amour fou
Meret Oppenheim Read about Meret,
one of Surrealism's many outstanding women artists and muses.
The Art of Amy Crehore
Posted by Amy Crehore at 8:51 AM