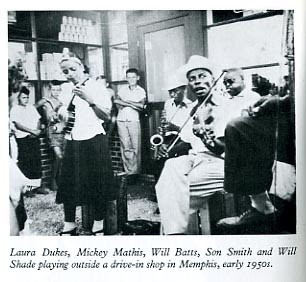 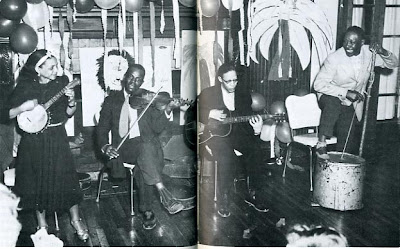 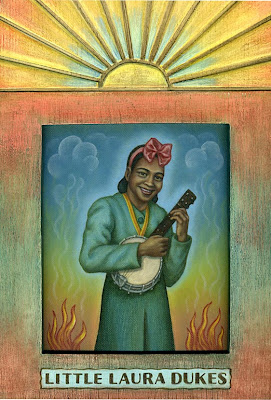 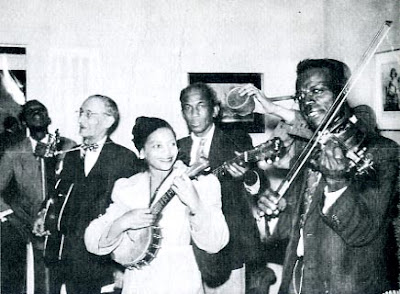 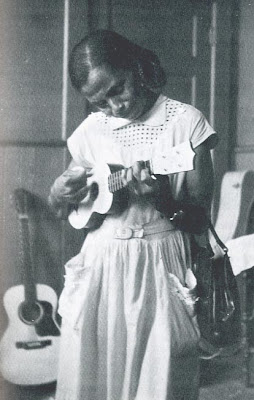 Little Laura Dukes 1960
I used to want to be like this little woman when I played with the Hokum Scorchers band. They called her "Little Bit". She played with Will Batt's band all over Memphis and in other parts of the south. She was an explosive singer, dancer and ukulele player. I made this portrait of her with a special frame. She's playing a banjo uke. Unfortunately, my scanner is too small to show the entire frame which has a carved-out sunburst at the top. Recordings of Little Laura Dukes are rare and brilliant. (Photos from "Memphis Blues and Jug Bands" by Bengt Olsson, Studio Vista Books, edited by Paul Oliver)
Here is more about Little Laura Dukes from the back of the album cover of "Memphis Sessions 1956-1961" (Wolf Records, Austria) on which she plays and sings with Gus Cannon and Will Shade -
"Born on June 10, 1907 in Memphis, TN, Laura made early encounters with the music scene in her hometown: her father played drums with WC Handy's Band and often took little Laura to the local theaters and taverns, where she later worked as a singer and dancer. In 1933 she met Robert Nighthawk in East St. Louis and took guitar lessons from him, and the two appeared as a duo in various local joints. Laura later switched to the ukulele. She followed Will Batt's South Memphis Jugband in 1938 and went on the road off and on until 1956. In 1954 she recorded for Flyright with Will Batts and for the Albatross label in Memphis in 1972 and appeared in the TV-documentation "THE DEVIL'S MUSIC- A HISTORY OF THE BLUES"(BBC-1 TV England 1976)."
She plays on 9 songs on this album: "Dirty Mother For Ya", Salty Water Blues", He's Knockin' on my Door", "He's Gone", "Shanghai Blues", "Nobody loves Me", I'm Goin' Down to Lucy Mae's", "Haunted House Blues", "Laura's Blues".
The Art of Amy Crehore
Posted by Amy Crehore at 2:01 PM

I used to watch her play at Blues Alley in the early 80's. I was 16 and she made quite an impression. I sure wish I could find some video of her.

Saw her in the early 80"s...unbelievable talent