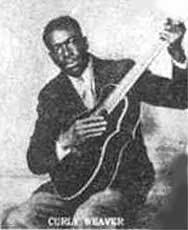 Curley Weaver -East Coast Piedmont Blues player
This number, "Tricks Ain't Walkin' No More", was first done by Curley Weaver in 1935. Memphis Minnie also did a version of this song. The Hokum Scorchers recorded this in 1990 for their first cassette. I'm playing the washboard and cups and Lou Reimuller is playing the National Guitar. We are both singing on this one - it's pretty funky and fast-paced. To hear the song, follow the link and scroll down for music player:
The Art of Amy Crehore - Music
This song is an encore - I previously blogged it in April. :)
Also, this song will change on Sunday night, so it will probably be different by the time you read this post.
Posted by Amy Crehore at 3:41 PM

I recently came across your blog and have been reading along. I thought I would leave my first comment. I dont know what to say except that I have enjoyed reading. Nice blog. I will keep visiting this blog very often.