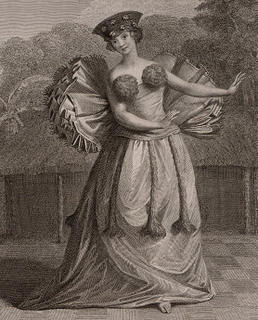 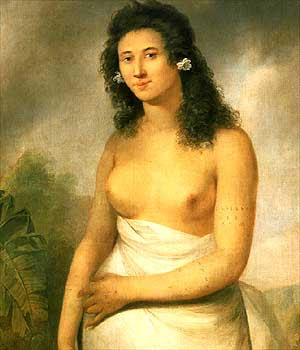 "John Webber, the officially appointed artist for Captain James Cook’s third voyage of discovery around the Pacific (1776-1780), along with William Ellis, surgeon’s second mate on the Discovery, provided perhaps the most comprehensive and unprecedented visual record of any of Cook’s voyages. After leaving England, Webber and Ellis drew and painted the Kerguelen Islands in the far southern Indian Ocean, and Adventure Bay in Van Diemen’s Land (renamed Tasmania in 1855), before moving on to Tonga and Tahiti, then the northwest coast of America, the Unalaska Islands and Siberia’s Kamchatka Peninsula, before returning along the coasts of Southeast Asia. The two artists made drawings and watercolour paintings of everything that came within their ambit, creating the first accurate ethnographic record of Pacific culture. Captain Cook's voyage" -
from Femme Femme Femme
The Art of Amy Crehore
Posted by Amy Crehore at 2:03 AM

The art that comes from those first voyages fascinates me- Webber, Hodges, Parkinson, but also the captains and officers themselves, who would often have taken classes or at least been taught that drawing is an important skill in the higher circles. Our first thought when encountering something new today is to reach for our camera, but they could only reach for their pen, sometimes hours after having seen the new marvel. Doesn't it seem like people just had more time in those days, and despite moving slower and not having access to the resources we're lucky to have today, made better use of that time? I have plans to sail to the South Seas later this year and repeat this experience at least partly, sketchbook and pencil in hand, trying to forget that I've 'seen it all before' on tv.