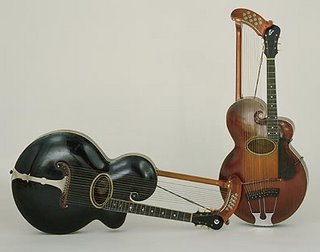 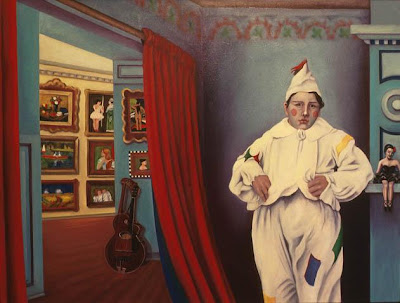 Oil Painting, "Banquet days" by Amy Crehore (30" x 40")
Here is a photo of the beautiful and unusual Gibson Harp Guitar. We have one of these at home: the instrument on the right, Gibson Style U, 1916. I painted this guitar in the background of a large canvas I did in 1984 called, "Banquet Days".
It was my first "pierrot" image and the pierrot was based on an image from an old tintype photo (a relative of mine who was an actor/singer in the theater).
I first exhibited this painting in Richmond, VA in a solo show and, a couple years later, in New Hope, PA where it won a first patron's award and sold to a collector.
The Art of Amy Crehore
Posted by Amy Crehore at 8:45 AM