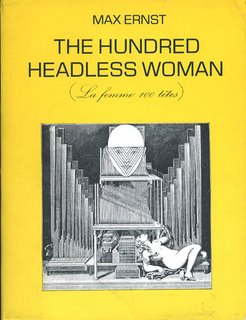 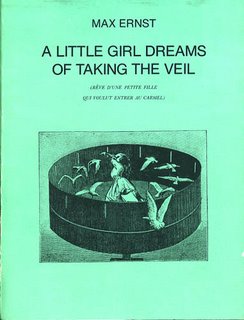 My bookcase is filled with inspiring art books. I have three of Max Ernst's surrealistic collage novels. One of them is "Une Semaine De Bonte" which is a Dover book on Amazon for only $12. The other two must be harder to find because Amazon doesn't even have pictures of the covers and they are now in the $55.-$140. range - used. I love these books!
(See images above)

ErlingWold is a composer in San Francisco. He ordered a couple of my Little Pierrot prints recently which prompted me to go look up his website. Very intriguing!
By the way, he was also the winner of my blog guessing game...so I sent him an additional print. He, in turn, sent me a CD of soundtrack music that he composed for the film, "The Bed You Sleep In" (director, Jon Jost). It's darkly moody and also enchantingly spirited.

Apparently, he has done some surreal theater pieces including this chamber opera (as described in his extensive bio):
"His critically acclaimed work A Little Girl Dreams of Taking the Veil, based on the Max Ernst collage novel, was presented by the Paul Dresher Ensemble and ODC in 2000. It was given its European premiere in a German version by the Klagenfurter Ensemble in July of 2001 and toured to Max Ernst's hometown of Brühl. "
I may have to order the CD which looks quite wonderful.
Check out:
Erling Wold on Amazon
Website: Erling Wold
Amy_Crehore
Posted by Amy Crehore at 8:11 PM