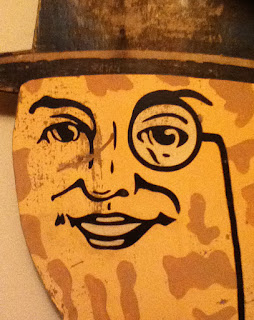 After 95 years of silence, they have given Mr. Peanut a voice. It's the voice of Robert Downy, Jr. Here's an article about it with a photo of the new animated Mr. Peanut.
I don't really care if Mr. Peanut can talk, I just wish he still looked the same as the old vintage sign that I have at home (shown above). What a beautiful silk-screened face he has. I'm not sure how old my sign is, but I'm partial to this particular "look". Of course, I realize that Mr. Peanut has gone through many changes over the years. If you google him, you can find them.
According to wikipedia, Planters Peanuts was founded in 1906. In 1916, a contest was held to design a logo for the company. A 14 year old school boy won the contest by drawing a peanut man. Later, a graphic artist added spats, top hat, monocle and cane.
The Art of Amy Crehore
Posted by Amy Crehore at 6:31 PM