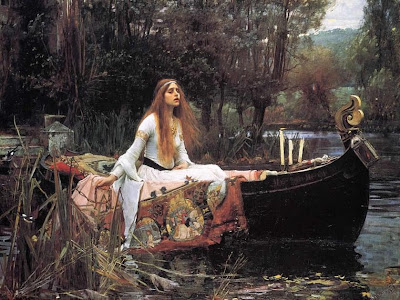 The Lady of Shallot, 1888, John William Waterhouse
It's a crime that this exhibit isn't coming to the U.S.A.! I think it was supposed to come here, but got cancelled. Anyhow, if you live near Montreal (or on the east coast), you should try to see this show (which is on view through Feb 7, 2010). It's the largest-ever retrospective of works by the great British artist John William Waterhouse (1849-1917). J. W. Waterhouse: Garden of Enchantment is the first large-scale monographic exhibition on Waterhouse’s work since 1978 and the first to feature his entire artistic career. This retrospective features eighty paintings and many drawings. Several of these works have not been exhibited since Waterhouse’s lifetime.
This guy is one of my all-time favorite artists. I saw his large painting, Ulysses and the Sirens, in a travelling show at the Portland Art Museum some years back and it blew me away. I saw some others at the Tate when I was much younger and living in England for a brief spell. I have a huge book on him published by Phaidon, but there is also a new catalog to accompany this exhibit. His handling of paint (very modern, French and thick), his ability to create naturalistic figures showing emotion and his classical compostions are unmatched. There is so much to be learned from studying his art. Plus, his paintings are gorgeous beyond belief. He could paint nature, landscapes, and figures interacting with each other like no one else. He made the myths both sexy and "real". He was born just as the Pre-raphaelites were first exhibiting their works. Here is a link to some images and a handful of videos with curator Peter Trippi:
The Montreal Museum of Fine Arts: WATERHOUSE Exhibit
The Art of Amy Crehore
Posted by Amy Crehore at 9:02 AM

It's really too bad that the Waterhouse exhibit is not coming to the USA especially the West Coast. I would love to see the exhibit.

Yes, unbelievably there no major Waterhouse works in museums here for public to view, so it's a shame that it isn't travelling here-
http://www.johnwilliamwaterhouse.com/locations