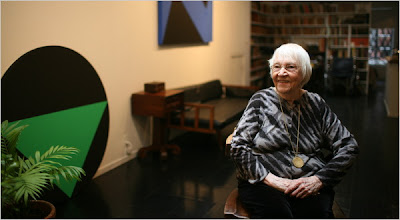 Todd Heisler/The New York Times
After six decades of painting, Ms. Carmen Herrera sold her first artwork five years ago, at age 89. She had exhibited her art over the years, but had never sold any of it. Since that first sale in 2004, collectors have pursued Ms. Herrera. Her paintings have now entered the permanent collections of the Museum of Modern Art, the Hirshhorn Museum and the Tate Modern. She just accepted a lifetime achievement award from the director of the Walker Art Center in Minneapolis. Read the rest of the article about this spunky 94 year old painter (written by Deborah Sontag):
The New York Times
The Art of Amy Crehore
Posted by Amy Crehore at 2:55 PM