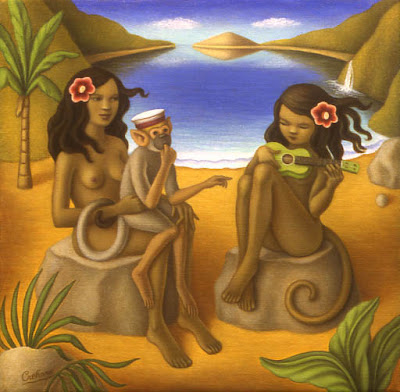 "The Creature" by Amy Crehore
Someone nice wrote this on his blog the other day:
"I found a ukulele in the thrift shop in P'aia a couple of weeks ago. Well, actually, Carl found it, and told me where it was, but that is another story (like, who is Carl?). I've really been enjoying it, been playing it more than my guitar. I really enjoy playing for my students in yoga class, and I adore the portability aspect. I'm also kind of into this artist I discovered on 'boing boing', Amy Crehore. There is a print called 'The Creature" in the back of the yoga studio that she painted. It is a gentle fantasy set in an apparent island paradise, tucked away in a valley. Two beautiful, brown skinned women sit at the edge of a clear blue pool. Both nude except for hibiscis flowers in their hair, one holds a monkey in her lab while the other plays a ukulele! Oh, and the uke player has a tail. I imagine that she is the creature, as the other two characters eye her curiously as she strums away on her little instrument. A remarkable depiction of magic and wonder, which also happen to be two of my favorite things. Cool thing is, I liked her art even before I started playing uke, I don't think it even registered in my mind that it was an ukulele in the print until I started writing this post. Trippy. Amy is having a show in Los Angeles in February/March, called "Dreamgirls and Ukes". If you happen to be in LA, and make it to the show, send me a postcard, would you?"
Here's the blog: The Main Line Sutras
(thanks!)
Posted by Amy Crehore at 8:25 AM