The Serpent was a Woman 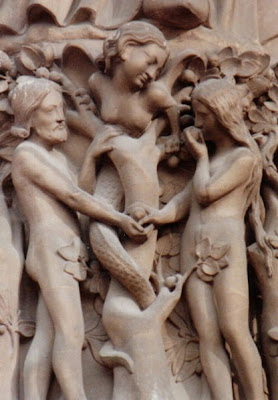 "Temptation of Adam and Eve"by Masolino 1425, fresco in Florence
Click on images to enlarge
"Medieval Christian art often depicted the Edenic Serpent as a woman, thus both emphasizing the Serpent's seductiveness as well as its relationship to Eve." quote- about Adam and Eve (Notre Dame sculpture) from Wikipedia
Christopher Witcombe writes more about Eve:
"Eve and the Identity of Women"
I like the placement of a blue iris (instead of a fig leaf) in the Hugo van der Goes painting. He paints Eve as a very beautiful, but spindly woman with a twisted arm. She looks pregnant, too. His serpent is less of a snake and more of a big lizard, looking like she could be Eve's little sister. All of the images above are compelling and surreal.
The Art of Amy Crehore
Posted by Amy Crehore at 10:18 AM