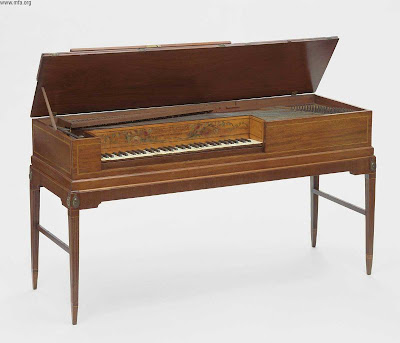 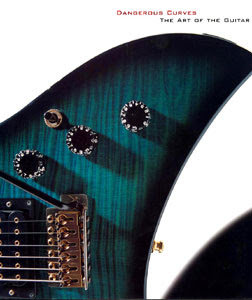 " Dangerous Curves- The Art of the Guitar" book by Darcy Kuronen
Apparently, a "Crehore" made the first pianos and bass-viols in America. In 1992, Darcy Kuronen wrote an award-winning article called "The Musical Instruments of Benjamin Crehore" which was published in the Journal of the Museum of Fine Arts, Boston. The Crehore piano (above) is in the museum collection and Darcy is curator of musical instruments there.
I dug up this information on Benjamin Crehore:
"In 1798 Benjamin Crehore, who was born in Milton, MA, was assisting in getting up machinery and appliances of the stage for the play of "Forty Thieves," which was soon to be introduced in Boston. His inventive skill was so admired by the leader of the orchestra that he applied to him to repair his broken bass-viol. Mr. Crehore undertook the job, and is said to have improved the tone of the instrument. This resulted in his beginning the manufacture of bass-viols, the first ever made in this country, and said to rival those imported..... Mr. Crehore's reputation in the musical world of that day caused all sorts of disabled musical instruments to flow into his shop for repairs. Among these was a piano. After analyzing it and mastering its movements, he entered upon the manufacture of pianos. The first piano in this country was made by Benjamin Crehore, in Milton." Dorchester Atheneum
Darcy Kuronen of the Museum of Fine Arts in Boston also put together an exhibit and wrote a book called "Dangerous Curves" which presents 400 years of guitar design and history, from ornamental models of the 17th century to modern electric guitars. It's a beautiful book which we picked up some years ago.
"Dangerous Curves" can be purchased here:
Museum of Fine Arts, Boston shop
The Art of Amy Crehore
Posted by Amy Crehore at 11:22 AM