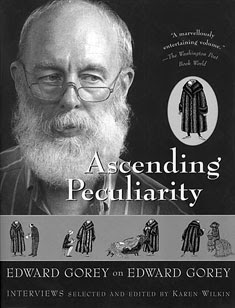 Edward Gorey, a prolific and wonderful artist/illustrator, died in the year 2000 and this is an excerpt from his obituary: "Gorey's fascination with surrealism came to the fore in The Object-Lesson (1958), whose story tumbles through artful non-sequiturs while the artwork shows increased mastery of balance and design. This led to Edmund Wilson's 1959 New Yorker appreciation of the early books - Gorey's first major critical notice. Later the Doubtful Guest was developed into a more disturbing, eyeless being with long rubbery arms, known as Figbash and partly echoing Max Ernst's protean figure Loplop. Other recurring Gorey icons are cats and the armless, featureless Black Doll; other acknowledged influences include Chinese, Japanese and Symbolist art." read more here: Guardian Obituary April 20,2000
It looks like there will be a documentary film about Edward Gorey coming out in the near future. Here is the myspace page where you can view some previews:
Edward Gorey Documentary by Mooncusser Films
Christopher Seufert, director
You can also follow the progress of the film here: Edward Gorey Film
I own a copy of "The Willowdale Handcar or the Return of the Black Doll" which is charmingly surreal and I also have a book of interviews with Gorey (shown above). He is very inspiring, plus he loved cats. I can't wait to see this documentary film. I also heard that the Jim Henson Company is developing a feature length live-action film of "The Doubtful Guest".
The Art of Amy Crehore
Posted by Amy Crehore at 11:27 AM