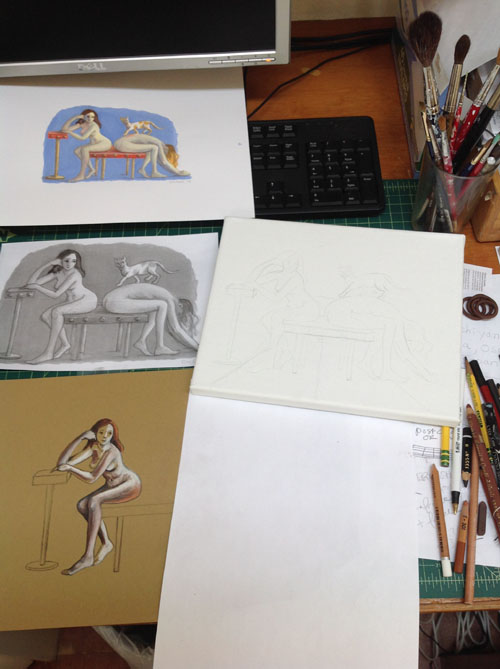 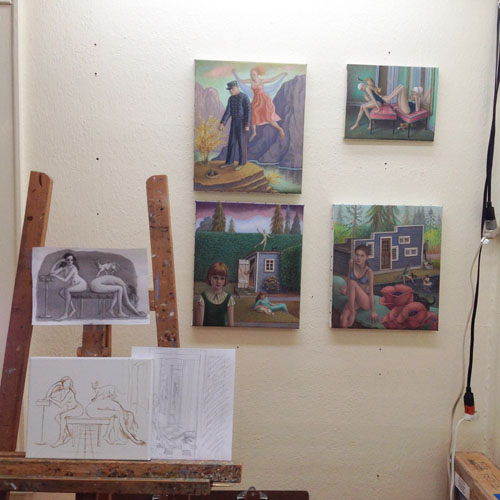 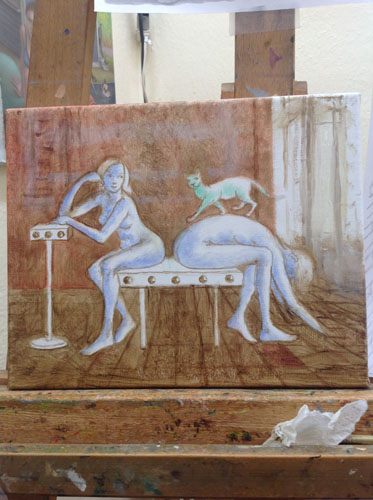 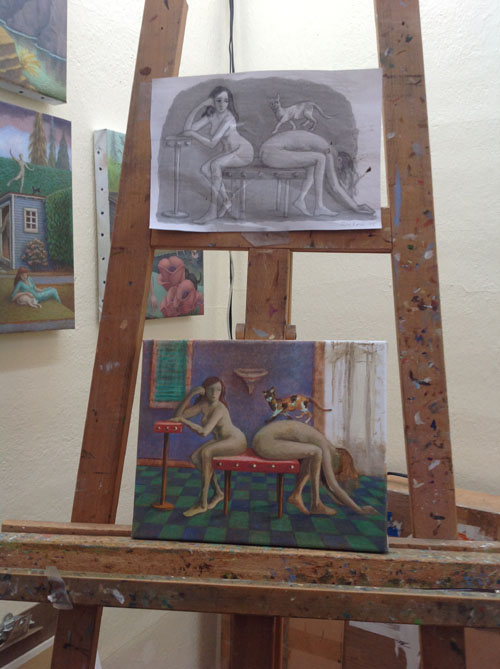 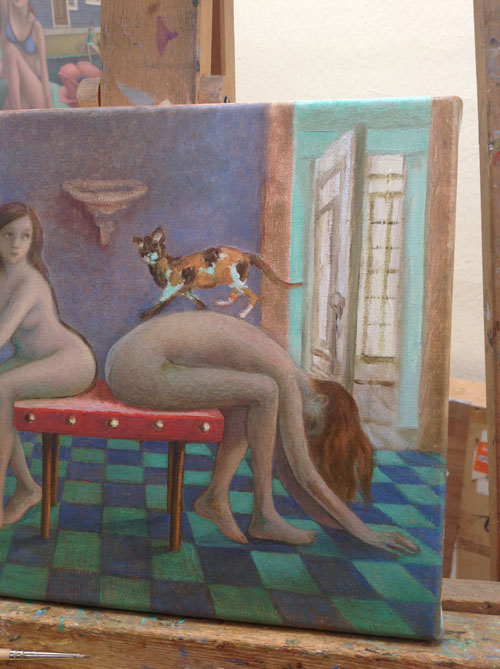 Working on a new canvas based on an earlier gouache
(Back Scratch Parlor).
Also a new pastel drawing of similar image.
Here are some progress shots.
The Art of Amy Crehore

Posted by Amy Crehore at 9:48 AM No comments: 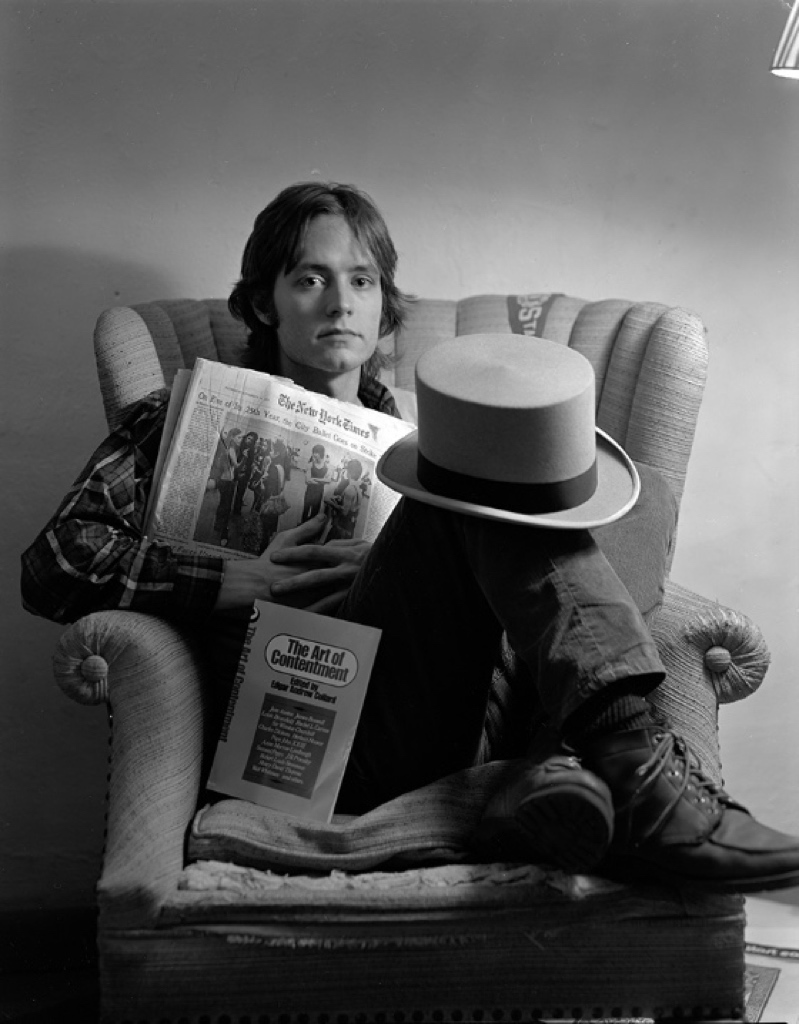 (Photo by Cotty Chubb)
Lloyd Fonvielle would have been celebrating his birthday this past weekend with the rest of his friends and family, but he passed away quietly at his typewriter in February.
What an old-fashioned gentleman he was.
He had a career as a screenwriter and lived in NYC and L.A.,
but he moved to Las Vegas about a decade ago to write stories.
While he was at it, he blogged the story of his life.
He blogged his favorite paintings, vintage illustration, pin-ups, and comics.
He ranted and raved about politics, photographed his travels and shared his musical tastes.
He wrote brand new western stories (available on kindle). He reviewed films.
We exchanged a lot of links from time to time. It was fun.
He never stopped being creative to the very end. He was very supportive of my art, posting just about every new painting I did. He also loved my Japanese friend Shiori Matsumoto's art.
I wish I could tell him that Shiori and I will be showing together in Tokyo this summer. He would have liked that.
Miss you Lloyd and thank you for your kindness.
I'm sorry that I never had the chance to meet you in person.
Here is Lloyd's wonderful blog:

Posted by Amy Crehore at 9:18 AM No comments: 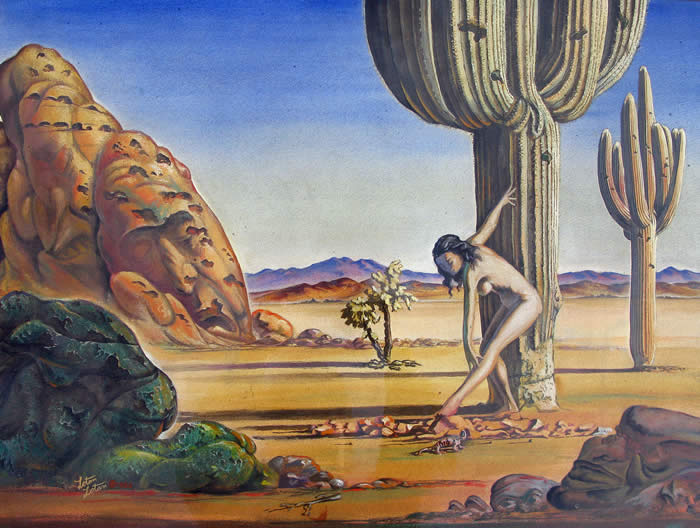 Lotan is a strange and unusual artist from Indiana who moved to Arizona in 1952 at age 47 with a girlfriend named Ruth, age 35, who became his wife. They were both painters and commercial artists. His name was Lotan S.Welshans, but as a couple they lived under the name Lotan and Ruth Ateliers.
Then, he changed his name to Lotan Lotan, PHD, MD and made up a bunch of bizarre stuff about a European background (to sell art?). Even more bizarre are some of his paintings. He loved Salvador Dali. He loved the desert. He combined the two influences and added nude women to create his own surrealistic fantasies. Other paintings of erotic nudes are intriguing combinations of crudely-painted folk art crossed with advertising/paperback pulp art.
Read more biographical info on this artist & his wife and see more images (Blue Coyote): LINK
Harper's Books LINK to even more of his art.
American Gallery Blog-  LINK with paintings and drawings. 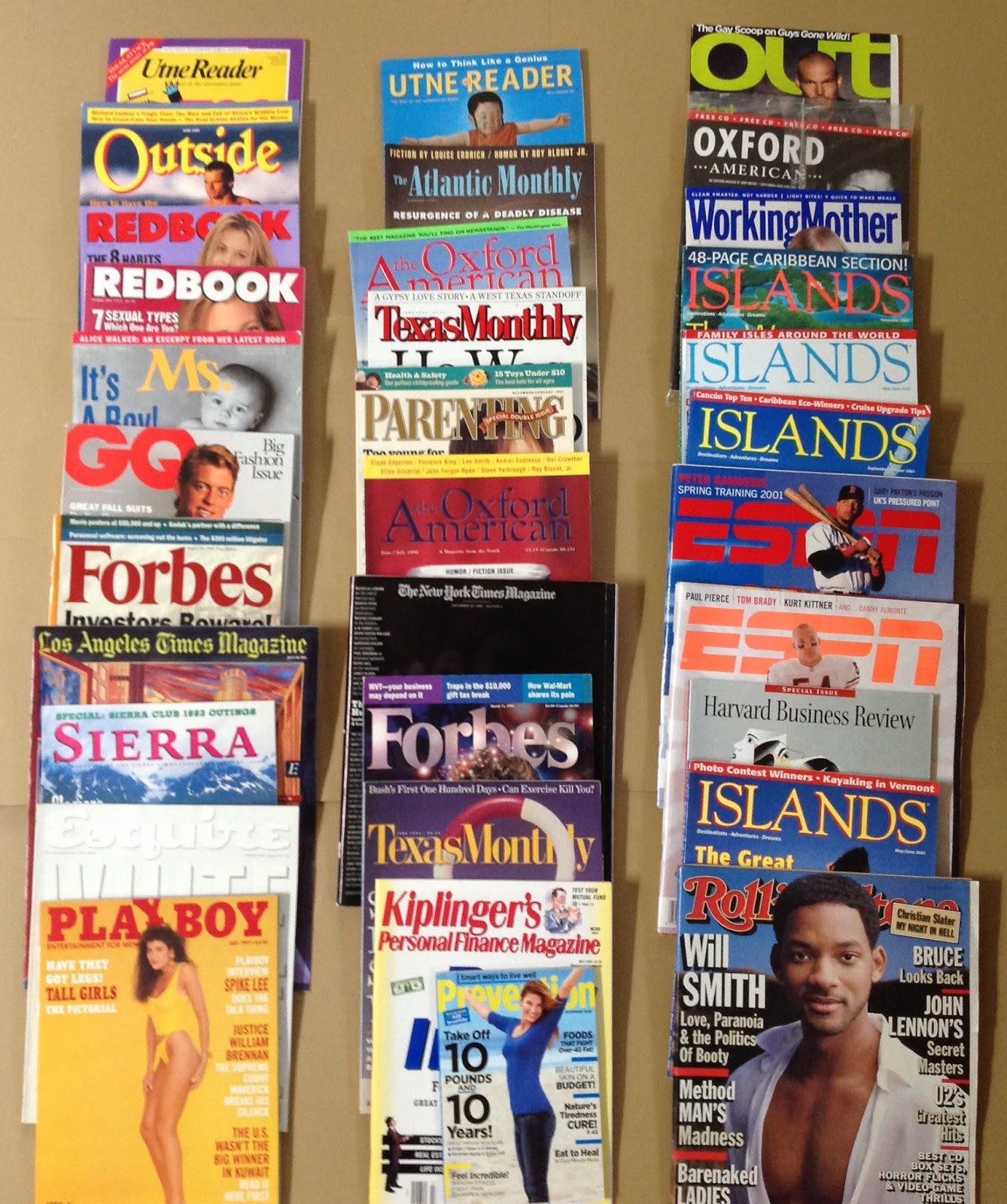 Here are some issues of big magazines where you'll find my illustrations.
These are from 1991 thru 2008.
I sent my original painted illustrations to the magazines
(after they called me with job assignments and we approved sketches)
and they would return them via fed ex after they were done scanning them.
Looking back, I worked with many different art directors all over the country.
The Art of Amy Crehore
Here are a few examples: 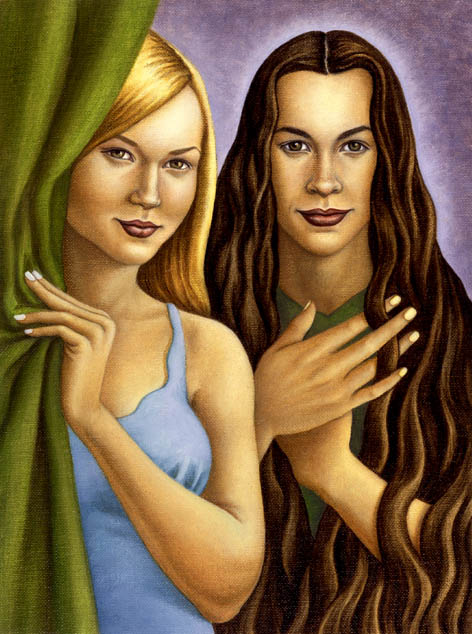 Jewel and Alanis Morrisette for Rolling Stone by Amy Crehore 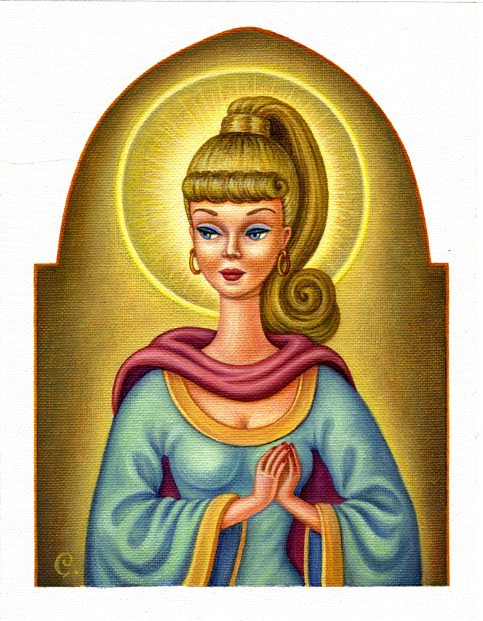 Barbie as a Saint for Playboy by Amy Crehore 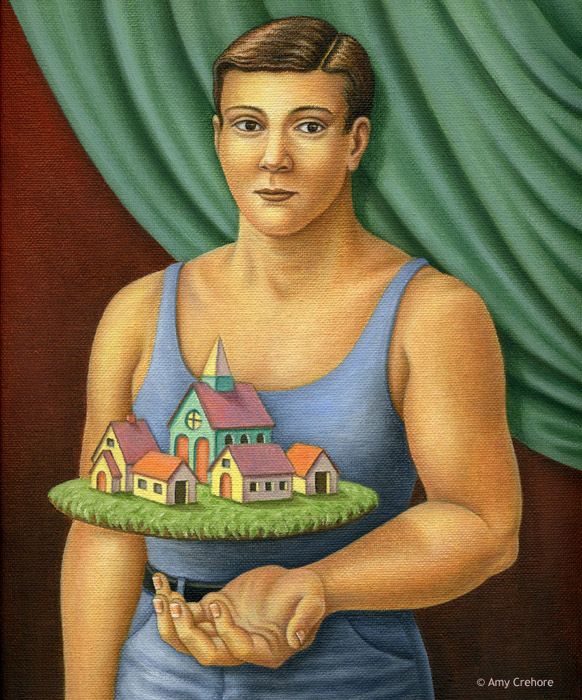 Nostalgia Man for New York Times Magazine by Amy Crehore
CLICK PHOTO TO ENLARGE (for sharp image)
Posted by Amy Crehore at 9:58 AM No comments: 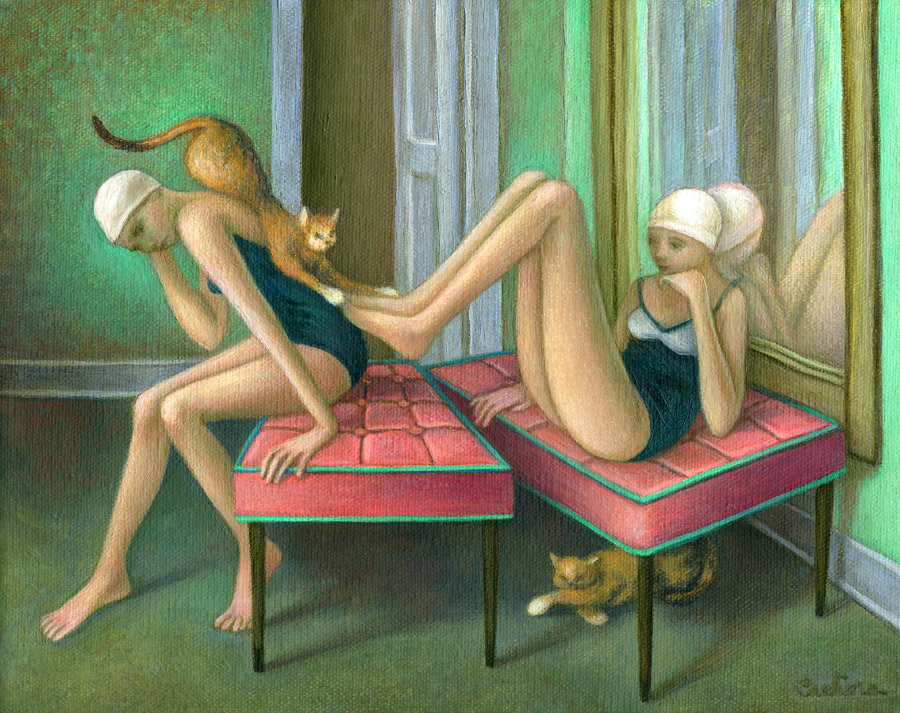 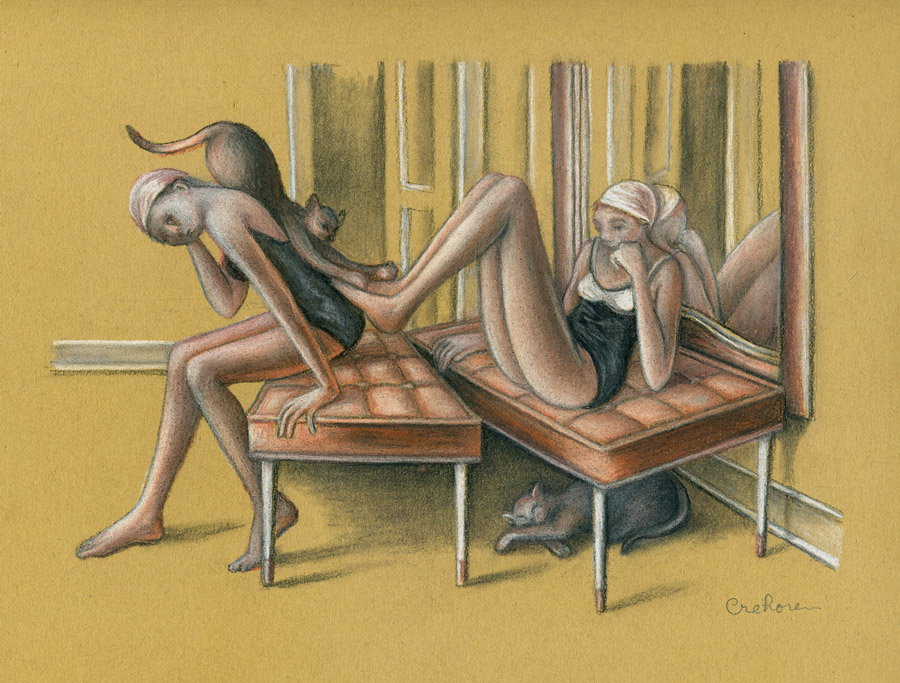 Waiting Room drawing by ©Amy Crehore 2015
Inquire about my originals amy@amycrehore.com
I'll be showing my art in Tokyo this summer. 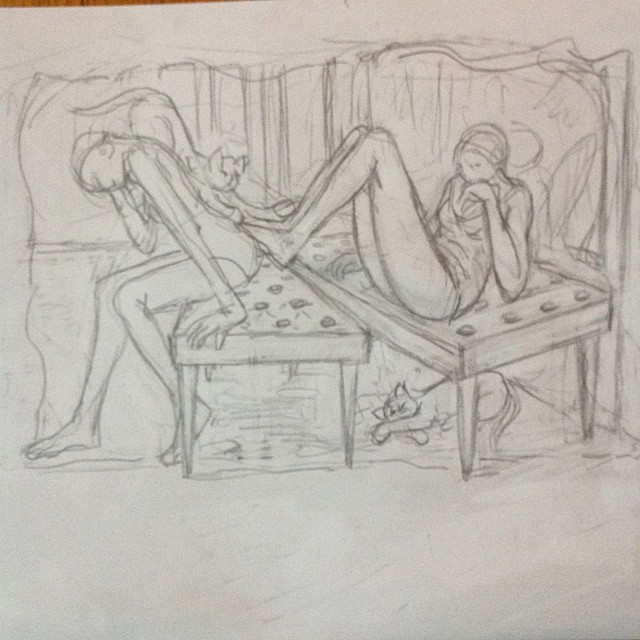 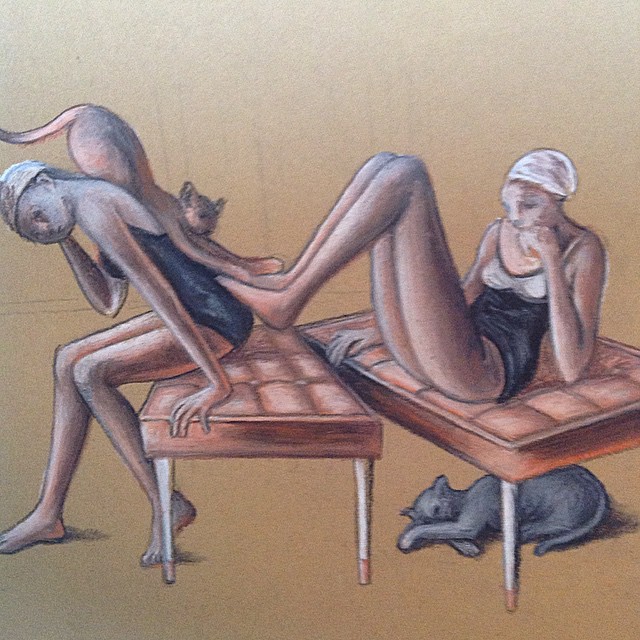 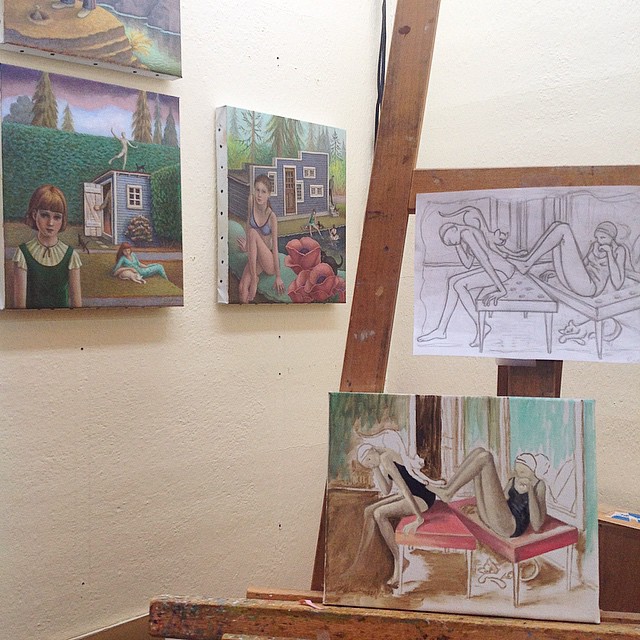 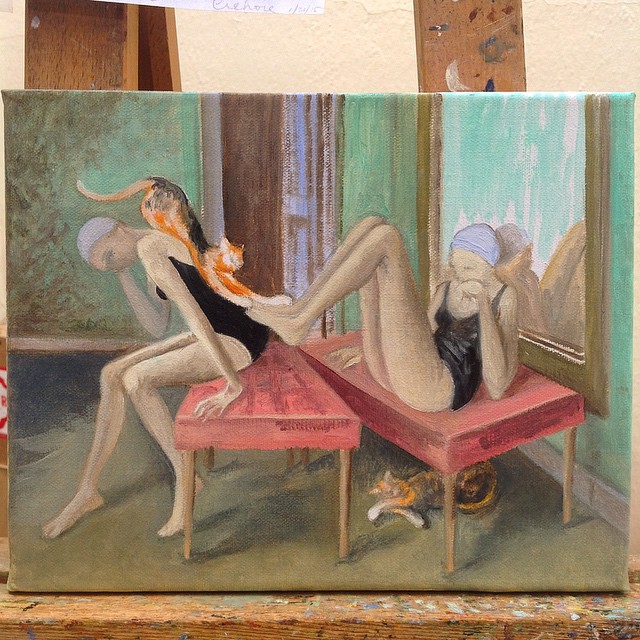 If you have been following my instagram , you may have
seen my latest works in progress.
I sketched an intuitive piece in pencil first.
Then I did a drawing in conte crayon (not yet finished) and
moved on to oil on linen this week. I also tried it in gouache last week, but did not like the results.
It is an interior scene with figures which I drew from my head. (No models or references.)
I am continually working on new things and I'm excited about an exhibit in Tokyo that I was invited to participate in (this summer). More about that later.
The Art of Amy Crehore

Posted by Amy Crehore at 8:46 AM No comments: 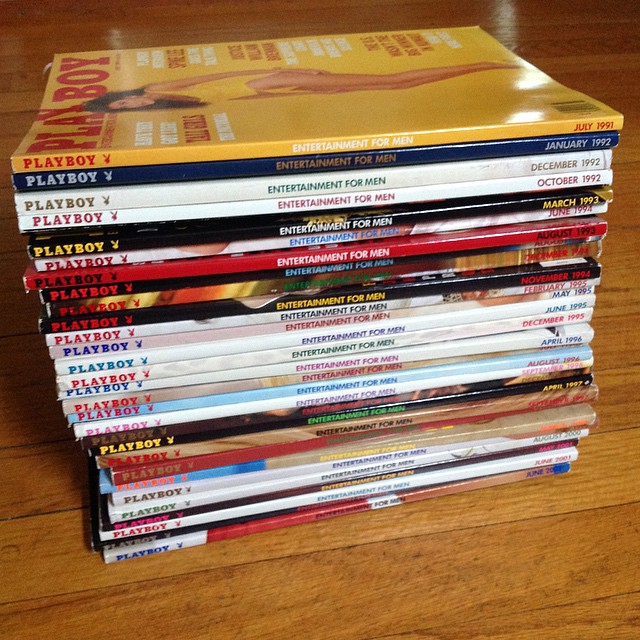 Stacks of Playboy Magazines from 1991 - 2002 that my illustrations are published in. 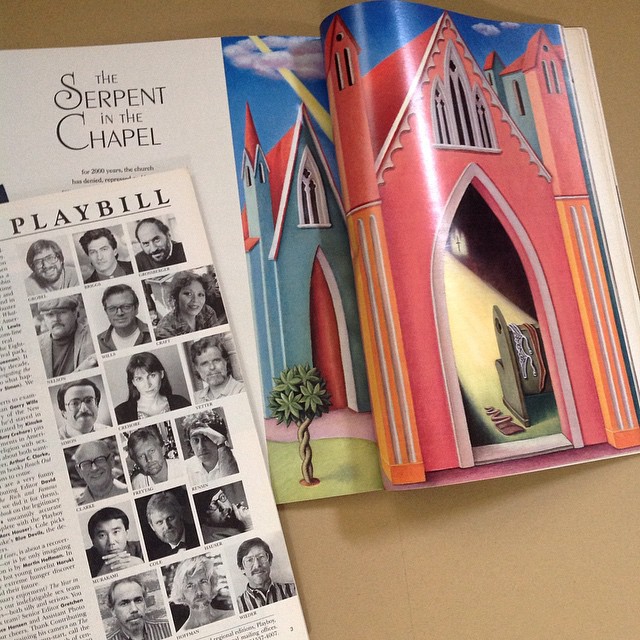 A spread I did for Playboy, issue Jan 1992. My photo appears in the middle of the Playbill. 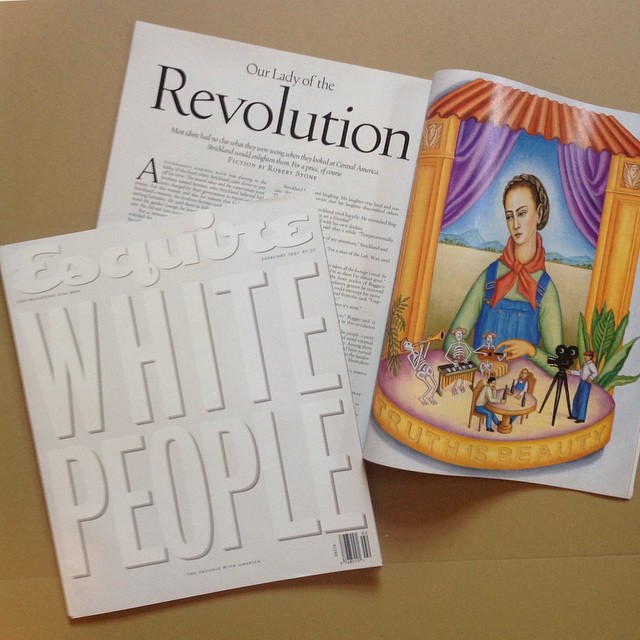 Here's an example of an illustration I did for Esquire magazine in 1991.
A story by Robert Stone (who just died this year).

I have done plenty of illustration work over the years for magazines and book publishers.
Just look at the stack of Playboys alone that my work has appeared in (above). Eleven years of regular assignments.
Kerig Pope at Playboy was the first art director for a "big" magazine to call me in 1991, followed by Rhonda Rubenstein at Esquire.
I have many more big name magazines and drawers of original illustrations to
sort through and catalogue like the example of Esquire above.
Right now, my website shows only part of my career history
with an emphasis on my fine art.
I am working on it and I am working on writing a better bio of my entire art career.
The Art of Amy Crehore
Posted by Amy Crehore at 8:39 AM No comments: