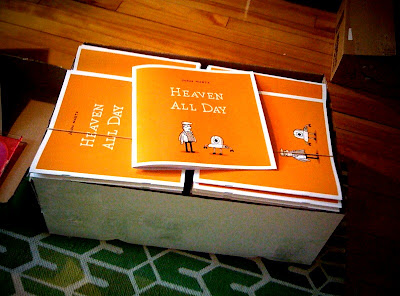 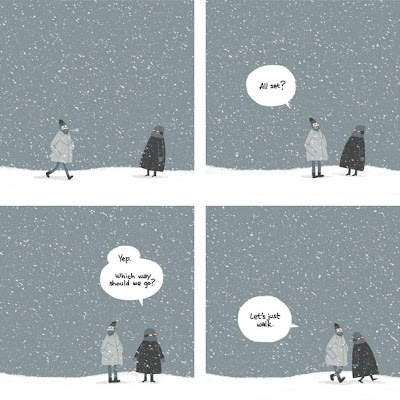 Illustration Copyright John Martz
Here is a page from a mini-comic by John Martz called "It's Snowing Outside...We Should Go For a Walk". This humorous little gem was just nominated for Best Emerging Talent, 2010 Doug Wright Awards. It's temporarily sold out, but John will have some copies at MoCCA (April 10, and 11) and then he'll restock it. You can read it online here. I got my copy this week and it's wonderful. There's no doubt why it was nominated- the elegant simplicity of it's snowy design and it's perfect little story. I hope it wins, but meanwhile he has another little treat in his shop (top photo): "Heaven All Day", an even more ambitious comic without words. You can read it and, also, buy it: here and here.
He also has art prints for sale on his newly designed website:
John Martz
What is it about Canada that breeds great comic artists, writers, musicians. The snow?

The Art of Amy Crehore

Posted by Amy Crehore at 6:25 PM No comments:

New Book by Mark Frauenfelder- "Made by Hand" 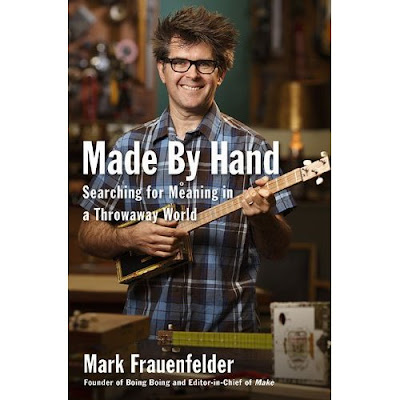 "Made by Hand: Searching for Meaning in a Throwaway World" (Hardcover) by Mark Frauenfelder is available for pre-order at Amazon and elsewhere. I'm looking forward to this! Here's a link to more info about the book: LINK

A friend sent one of these to the house the other day.

Only it was a dried specimen under glass (aka heteropteryx dilatata female).

Posted by Amy Crehore at 1:33 PM No comments: 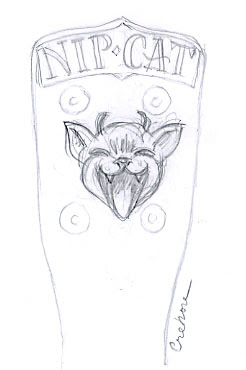 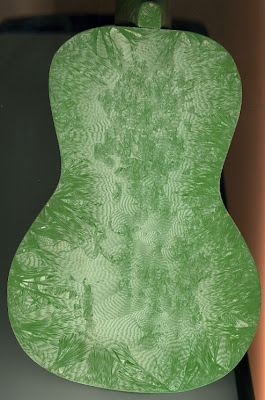 Back of my green duco-finish uke from the late 1920s. Click to enlarge.
There's a beautiful green duco-finish vintage ukulele in my collection that I am getting ready to enhance. I won't touch the back and sides, but I have something in mind for the headstock and part of the front. Here's my pencil sketch for the headstock design. I call it my "Nip-Cat" uke. I scanned the back of the actual uke on my scanner bed. You can see the gray and green crystallized finish. This baby was found in it's original Montgomery Ward mail order box and had never been played.
More of my hand-painted fine art ukes can be found here , here and here. Some are vintage and some are built from scratch. My Dreamgirl's gallery show in L.A. last year featured 13 of them including another duco (a black one) called The Demon.

The Art of Amy Crehore

Posted by Amy Crehore at 2:43 PM No comments:

People and Their Houses 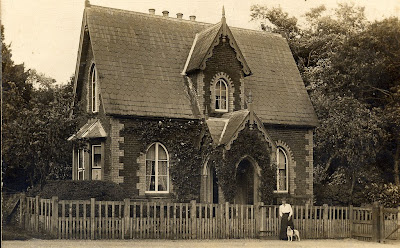 Photo copyright lovedaylemon
Lovedaylemon has the most beautiful vintage set on flickr of people standing in front of their houses (such as the gothic victorian house above).
Us Outside Our House
(flickr)
Posted by Amy Crehore at 8:25 AM No comments:

A Grandfather's Trip Around the World, 1926 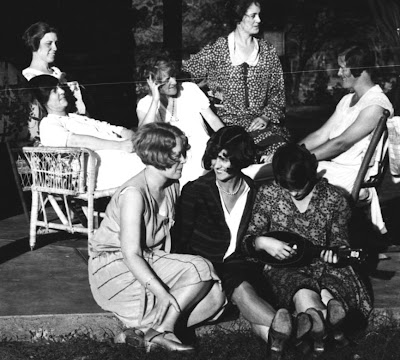 click on image to enlarge (detail of larger photo, copyright Mark Lowrie)
Hawaii, 1927. One of the girls is playing a pineapple uke. This photo looks as fresh as if it were taken yesterday. And, in a way, it is that fresh. My good friend, photographer Mark Lowrie from L.A., recently found a treasure box of negatives of his grandfather's trip around the world. His grandfather's name was Robert Henry Lowrie and they called him "Bulldog". He was an engineering teacher in Honolulu. When he got divorced in 1926, he decided to take a trip around the world. Mark had read his grandfather's journal many times, but he didn't realize there were photos, too. The contents of the box were so amazing, that Mark decided to put together a book:
"This book is a combination of his day to day journal entries and recently discovered photographs of the journey. Following the trade routes by ship around the globe, there are period photos of Japan, China, the Philippines, Ceylon, the Mid East, Europe, and a road trip across the United States. He flies across the English Channel, (the year before Lindy crosses the Atlantic), meets the President at the White House and the Pope at the Vatican (refusing to kiss his ring)."
How cool is that? Here's the link to Mark's book:
"The Voyage of 'Bulldog' Lowrie"
The Art of Amy Crehore
Posted by Amy Crehore at 10:23 AM No comments:

thanks, suprovalco — A mini-documentary with a short clip of Gus Cannon playing ragtime banjo- "Walk Right In"- at age 100! He had a jug band called Gus Cannon's Jug Stompers in the 20's and 30's. Read more about his career and life: LINK