Best Thing I Saw in NYC 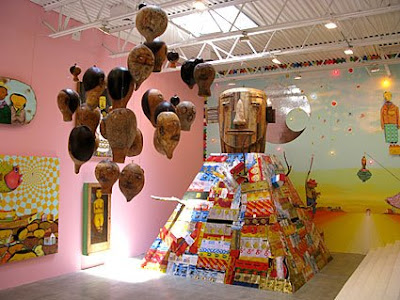 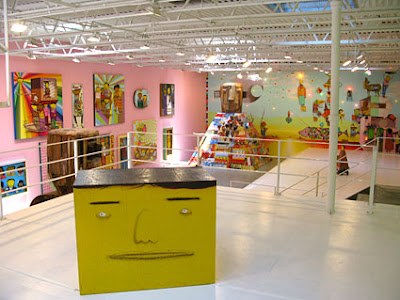 Photos from The World's Best Ever blog
The best thing I saw on my trip to NYC was by far the Os Gemeos exhibit entitled "Too Far Too Close" at Deitch projects. Here's the link to the Deitch website and here's a link to The World's Best Ever blog which has some great photos of this amazing environment that these Brazilian twin brothers created. No photos can really even show how it felt to be inside of this place. The installation was huge- lots of color, a giant space filled to the brim with magical folk art. There were musical pieces, wooden sculptures that you could crawl inside of and sequined paintings that lined the walls.
Show continues until August 09, 2008! Don't miss it if you are in NYC. It's sooo cool!
18 Wooster Street, New York City.
Os Gemeos (pronounced "ose zhe'-mee-ose.") are two artists from Sao Paulo, Brazil. Gustavo and Otavio Pandolfo were born in 1974, identical twin brothers whose pseudonym, Os Gemeos, translates to "the twins" in Portuguese. In addition to their incredible works created on the streets of Sao Paulo, the twins have in recent years exhibited their art in museums all over the world. They met Barry McGee in 1993 in Brazil and the artists have collaborated and influenced each other since then.
Read about and see more of Os Gemeos' work here:
Deitch Projects
I will blog more about my own art opening in Brooklyn and my recent trip to NYC, so stay tuned.
The Art of Amy Crehore
Posted by Amy Crehore at 8:34 AM

Welcome back, Amy. I hope it was a successful, as well as a fun trip! Looking forward to reading about it.

p.s. Check out my pinhole camera book on flickr when you get a chance

love that stuff.... you just want to live in that rom.

Amy Crehore
Amy Crehore has exhibited her fine art paintings in galleries and museums from L.A. to NYC and internationally in Tokyo, Japan and Milan, Italy. Amy has also been a long-time illustrator for most of America's top magazines: Rolling Stone, Esquire, ESPN, Playboy, Forbes, GQ to name a few. Her paintings have been featured by boingboing.net, Juxtapoz.com, Inked Magazine, American Illustration, Communication Arts Magazine, Blab. She is also the creator of Tickler Ukes, Little Pierrot and Monkey Love series works. Her double portrait of Jewel and Alanis was chosen for Rolling Stone: The Illustrated Portraits (Chronicle Books) and the Rolling Stone art collection. Her paintings are collected internationally. Please visit: amycrehore.com for more information and images.