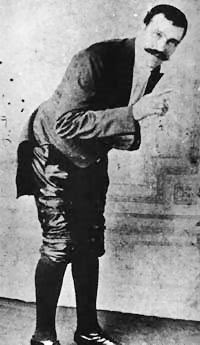 The Hokum Scorchers sang a traditional song about different kinds beans and what they could do to you. But, I never heard of this guy before:
"In the early part of the 20th century, Vaudeville stages in both France and America thrilled to the pooting of the wondrous, the amazing, LE PETOMANE! Joseph Pujol, a man of singular talent, was born in Marseilles, France in 1857.....would fart toons, suck water up into his rectum and spray like a firehose, and even performed that old standard of stage performers everywhere: impersonations.... According to Wikipedia, his fame lives on in the fringes of society: plays have been written on him, documentaries filmed, and–ostensibly–Johnny Depp himself has mentioned that he would like to portray M’sieur Pujol on film." - read more story by Derek C.F. Pegritz at
ectoplasmosis
Le Petomane courtesy of Damn Interesting .
The Art of Amy Crehore
Posted by Amy Crehore at 3:13 PM