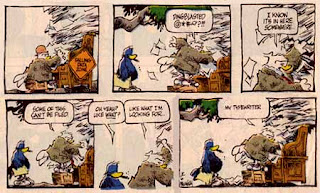 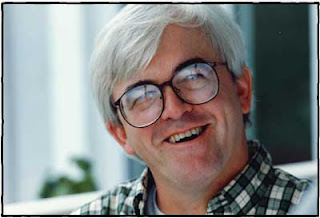 Jeff MacNelly, photo courtesy of ValueRich Magazine
I have been wanting to do a tribute to artist Jeff MacNelly for some time now. He was a 3-time Pulitzer Prize winning political cartoonist and creator of the comic strip, "Shoe".
When I was much younger and fresh out of college at V.C.U., I had a part-time waitress job at Eden's Restaurant in Richmond, VA. One of my customers was Jeff MacNelly, who walked across the street everyday to the restaurant from The Richmond Newsleader to have lunch with a friend or two. He always sat at the same table in my section and, even though I was a terrible waitress, he was my loyal customer. The day he won his second Pulitzer Prize, he ate lunch in my booth and I took a polaroid of him sitting there with the same grin on his face as in the photo above.
I remember that he invited me to see his office one day and I noticed that his book shelf was filled with art books (including the Society of Illustrators Annuals). He was kind enough to write me a recommendation for a grant at the VA Museum and he gave me extremely good advice: "Keep practicing your craft. That is what my father told me."
To this day, I will never forget those words. "Practice, practice, practice". And that is what I did. He also told me that there were not enough women political cartoonists and that I should think about becoming one. He was very humble and generous with his time. I was certain that I was bugging him the day I went to his office with my portfolio, but he really liked talking about his dad and painting.
I wish he was still alive today so that I could tell him, "Thank you". I kind of wish that I could show him my new work in "Blab!" and all of the other things I have done in the years following my waitress years. But, alas, Jeff died in the year 2000 of cancer at the very young age of 52 and I was shocked to hear the news.
Here is a 2005 article about Jeff:
"A Big Shoe to Fill"
And a little bio of Jeff from lambiek.net:
"Jeff MacNelly, the son of a publisher and portrait painter, created his first strip in 1969, while working as a political cartoonist for a weekly paper in Chapel Hill, NC. A year later, he relocated to The Richmond Newsleader in Virginia, and in 1972, his work was awarded with the first of three Pulitzer Prizes. In 1977, he started drawing the newspaper strip 'Shoe', named after the legendary Jim Shumaker, for whom Jeff used to work at the Chapel Hill Weekly."
Also, Wikipedia , www.macnelly.com, www.jeff-macnelly.com
The Art of Amy Crehore
Posted by Amy Crehore at 9:52 AM

So glad you dropped in Kristy! What a wonderful man he was- seems like yesterday that he was sitting in my booth. He certainly inspired me with his talent and success and kindness...he lives on and on through his art.

Dear Amy,
I was so touched by your story about Jeff. He was the most generous, modest, hilarious and brilliant person to grace the planet. Your paintings are wonderful and he would be very proud of you. It was an honor to be his soul mate. Please get in touch with me because it would be fun to link your website to Shoe's new one which we are rolling out in about a month.
Regards, Susie MacNelly aka Roz
p.s. Jeff did many paintings and bronzes in the ten years that we were married. He was very happy living in the Blue Ridge Mountains and making art all the time.

Hi Amy,
I stopped by because I Googled Jeff's name. I was reminiscing about "Shoe" with someone, and now here I am. I was very surprised to learn Jeff was so young and that he has already passed away. Your tribute to him is very moving, because it is clear that he was a most positive influence on you. As we all advance in age, it is heartening to think how wonderful a few well placed words can be absorbed by the eager student. I knew Jeff was a rare talent, and now (because of your blog post) I know he was a supremely warm and generous person too.