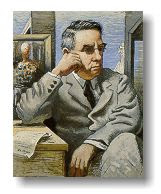 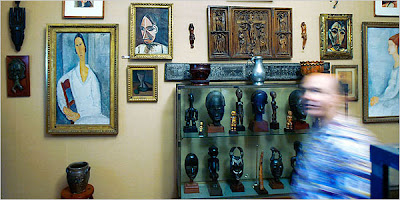 Photo courtesy of NYTimes
Here is a just a mere glimpse of one of the 24 rooms at the
Barnes Foundation in Merion, PA from a New York Times article. There are 59 Matisses, 180 Renoirs and 68 Cézannes in the Barnes art collection. That fact alone is astounding! There are also many Rousseaus, Picassos, Modiglianis, De Chiricos and Van Goghs. If you haven't been to the Barnes Foundation, you are missing the best collection of Impressionist and Post Impressionist paintings in the world. There are a great number of rare masterpieces. I might have to order the CD-Rom from the Barnes Foundation website just to renew my memory of the place.
When I was young, we used to visit my grandparents in Merion, PA quite a bit. I never even realized that hiding behind one of the gates in a nearby neighborhood was the secret Barnes collection. That is until I went to college and one of my art history professors took us on a field trip to see the place. I was never the same again. It's the most spectacular art collection that anyone could ever lay eyes on. I went back over a decade later and was astounded again. It's still very private and mysterious and you have to call first and arrange an appointment, but anyone who truly loves painting should really make it a vacation destination.
The Art of Amy Crehore
Posted by Amy Crehore at 6:13 AM