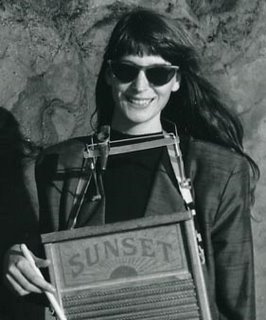 I played washboard, tenor banjo and sometimes a National plectrum in a little band called "The Hokum Scorchers" for many years. That's a kazoo mounted on the rack. We mostly played songs that were popular in the 1920's and 30's by artists such as: Papa Charlie Jackson, Blind Willie McTell, Blind Blake, The Memphis Jugband, Tampa Red, Memphis Minnie and countless others.

Wikipedia's definition of Hokum -
"Hokum is a particular song type of American blues music - a humorous song which uses extended analogies or euphemistic terms to make sexual inuendoes. This trope goes back to early blues recordings and is seen from time to time in modern American blues and blues-rock."
"Got out late last night, in the rain and sleet
Tryin' to find a butcher that grind my meat
Yes I'm lookin' for a butcher
He must be long and tall
If he want to grind my meat
'Cause I'm wild about my meat balls."
from Meat Balls, by Lil Johnson, recorded about 1937