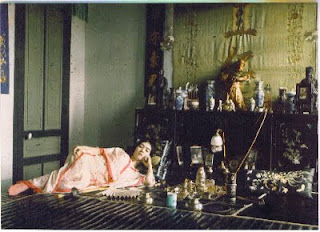 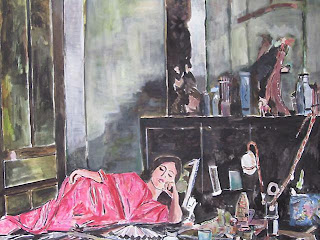 Top photograph (an autochrome) was taken by Leon Busy around 1915 in French Indochina. Bottom image is a painting called "Opium" by Bob Dylan (2010) from the Gagosian Gallery website.
Looks like Bob Dylan used the Leon Busy photo as a reference for his painting.
From Sept. 20, 2011 - Oct. 22, 2011, Bob Dylan will be showing his paintings, "The Asia Series", at Gagosian Gallery's Madison Ave. location.
Bob Dylan had a show of 40 paintings just last year at the National Gallery of Denmark called "The Brazil Series".

You can see more photos like the one above on Steven Martin's Opium Museum website. Steven has a book out called the Art of Opium Antiques. He is also working on a memoir about collecting opium-smoking paraphernalia, to be published in 2012 by Villard, an imprint of Random House. Thanks go to Steven for finding the Leon Busy photo posted above.

A bit harsh. It is true that Bob's fame is assisting him gaining wall space for his paintings, but wouldn't you do the same if you were in this position? As a photographer who's work isn't commercial, contemporary and often not deemed traditionally aesthetically pleasing (a lack of rainbows, sunsets or cute babies), I would love to get my work on walls without conforming to what the everyman wants to see. Bob is painting what he likes and that's a good thing.
And I think his Asia Series is looking good, he's improved since his Brazil Series.
As far as the copying aspect, he seems to be a big photography fan having used Ted Croner's 1947 image 'Taxi, New York at Night' on the 'Modern Times' cover and several Magnum photographers work including Josef Koudelka, Bruce Davidson and Leonard Freed on the 'Together Through Life' and 'Christmas in the Heart' packages.
In this latest Asia Series he has also referenced or copied Magnum stalwart Bruce Gilden's Japan Asakusa, (1998) image: http://blog.magnumphotos.com/images/NYC7349.jpg
I find it interesting and am glad to see my favourite musician combining great photography, writing, and now art with his music. A LOT better than the usual failed cross-over attempts by famous people.

Amy,many thanks for putting these two together. I've blogged about the painting before, but now I've just put up a new post about both, giving you a namecheck, at http://bobdylanencyclopedia.blogspot.com

Love your work, love all of Dylan's work, love the ukulele, love women. Thanks

Artists, including the "old masters" have copied the work of those who come before them. In art schools there are assignments to copy famous artists/paintings, starting with still life- moving to landscapes and portraits.

Sure, Bob gets the chance to display his work in gallery settings that most of us will not ge... so what? Dylan is a totality- you can't really separate one part of his art/life from another- he is a work of art so to speak, something/someone he has been creating for a very long time. He's had the longest running performance art piece in history as Bob Dylan in the world.

That's always has been one of my favorite images!!

Do you know who holds the copyright for the photo? They might like to be made aware of Mr. Dylan's take on it

Did you really just ask who owns the copyright on a 94 year old image? Good grief - people are insane.

Bob Dylan's painting isn't bad. Its a perfect resemblance of the picture taken by Leon Busy.