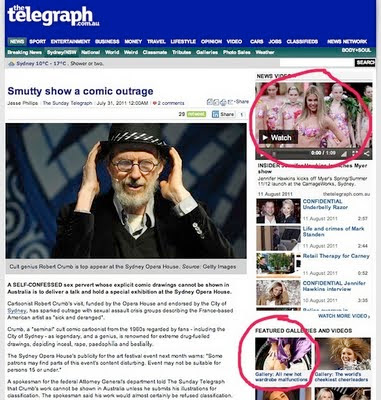 Screen shot of the negative article in The Telegraph which caused R Crumb's decision to stay home.Image via Dylan Horrocks

The Sydney Morning Herald has published a letter by R Crumb explaining why he won't go to Sydney to appear at Graphic (a festival of illustration arts):"Sorry, folks. I do feel bad, as I hate letting people down. But I decided I’d rather bear the pain of letting people down than subjecting my long-suffering wife to a 10-day period of dread and anxiety for my well-being. She’s been awfully nice to me since I told her I wasn’t going! She baked a chocolate cake even!" READ MORE of R Crumb's letter HERE: LINK
I don't blame R Crumb for cancelling his upcoming gig in Australia. He doesn't need to appear at events that upset his equilibrium. Life is too short for Crumb to be used for other people's political agendas. If Aline's gut says "no", it's a good idea to trust it.
Posted by Amy Crehore at 7:52 AM