Listen to Orson Welles: "The Mercury Theater on the Air" 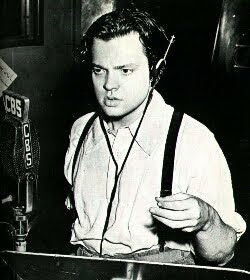 Orson Welles
Last night I watched an old B & W thriller from 1946 called "The Stranger"on PBS. The movie starred the great Orson Welles, Loretta Young and Edward G. Robinson. After the movie, I did an online search on Orson Welles. LINK
I read about his marriages, affairs, films, etc. and I came across a great website of his early work in radio.
"The Mercury Theater on the Air" was a radio show started in 1938 which featured the New York drama company founded by Welles and John Houseman. It was later called Campbell Playhouse when Campbell's Soup began to sponsor it. Many of the shows are classic dramas: Dracula, Treasure Island, A Tale of Two Cities, 39 Steps, The Count of Monte Cristo, Rebecca, Our Town, War of the Worlds, etc. Here is a link to over 60 radio shows:
THE MERCURY THEATER ON THE AIR
(link to history)
(Thanks, Kim Scarborough for creating this page).
Posted by Amy Crehore at 1:53 PM