Talk About Comics at Whitney Museum 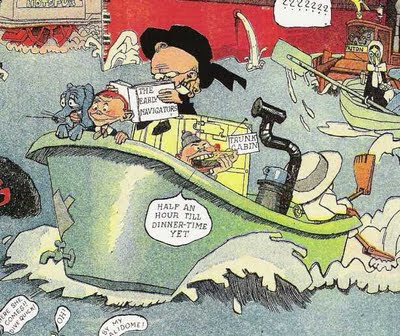 Page from Kind-er-Kids
Art Spiegelman, Chris Ware and Gary Panter talked about early comics last week at the Whitney Museum. There is currently a Lyonel Feininger retrospective at the museum called "At the Edge of the World". “The Kin-der-Kids” and “Wee Willie Winkie’s World,” the comic strips that Lyonel Feininger debuted in 1906, formed the basis of many of his subsequent paintings!
Here's the audio from their panel discussion at the Whitney:
I am quite interested in the history of comics myself and I even published my own comic book in the early '80s. There were 5 issues of "Boys and Girls Grow Up", one per year. Last Gasp was our distributor. Scroll down to see a couple of the covers that I created:
Amy Crehore Comic
I still have some copies of my comic books in mint condition. They were quite limited. Maybe I will have to do another give-away on this blog. Stay tuned.
Posted by Amy Crehore at 11:10 PM