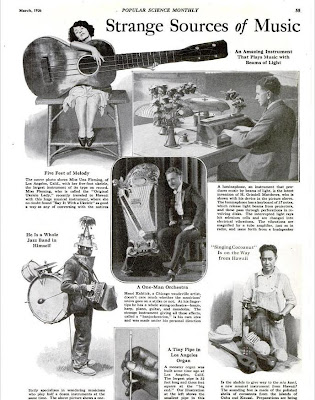 Click to Enlarge
Miss Una Fleming from L.A. with her five-foot ukulele is featured on page 55 of the March 1926 issue of Popular Science Magazine. The photo is surreal - the giant ukulele dwarfs the player. Hawaiian coconut ukuleles are also featured (bottom right) as well as a jazzy clown one-man band (bottom left).
1926 was the peak year of the American ukulele boom. I wonder how many other magazines published articles on ukes that year? C.F. Martin produced 10,870 ukes in 1925 and a whopping 14,101 ukes in 1926. Production dropped off in 1927 to less than half of that. (1943,1949 and 1950 were also fairly large production years.) It's a trendy little instrument, falling in and out of favor.
The ukulele is back in favor again in 2010.
POPULAR SCIENCE ARCHIVES
(Thanks, Ted Dawson for sending me the article.)
The Art of Amy Crehore
Posted by Amy Crehore at 6:37 PM