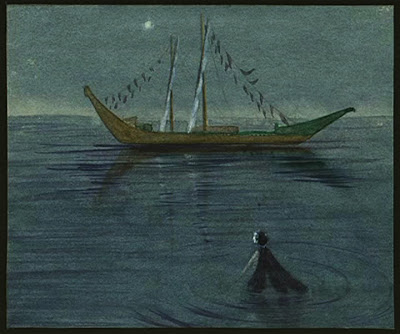 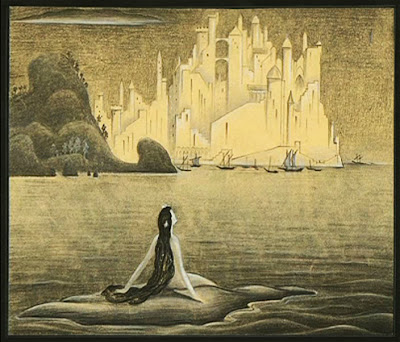 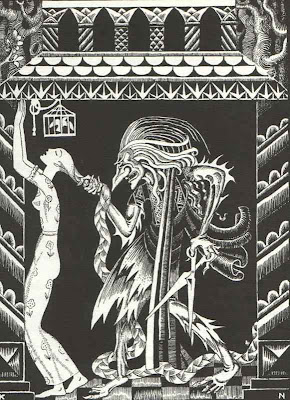 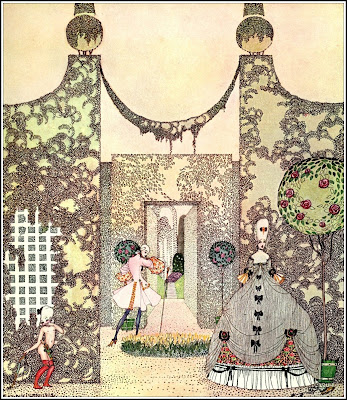 In Powder and Crinolin illustration 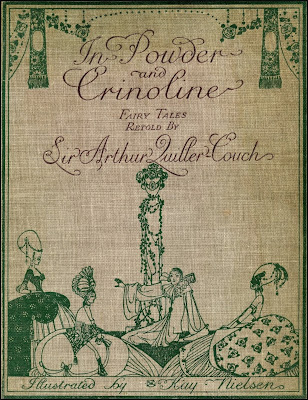 Kay Nielsen (1886-1957) was an amazingly talented Danish illustrator in the first part of the 20th century. The book shown above was his first commission -completed in 1913. The next year, he did artwork for East of The Sun West of The Moon, old tales from the North. In 1924-25 he illustrated Hans Andersen's fairy tales and stories by the Brothers Grimm. In the years between these books, he designed stage scenery for Copenhagen theater. In 1930, another illustrated book called Red Magic was published.
Kay Nielsen travelled to California to work on a stage production of Everyman at the Hollywood Bowl in 1936. He decided to stay in California and he applied for a job in the Walt Disney animation department. He worked on designs for Fantasia and they were lucky to have him. He also did designs for future projects, The Little Mermaid (above) and a sequel to Fantasia, but, unfortunately, he was laid off in 1940. He was 54.
Kay Nielsen died in poverty in 1957, at age 71, in a house donated to him by friends. He executed four murals in Los Angeles schools and churches during the last couple of decades of his life. This is kind of a sad ending for someone who was truly one of the great, important artists of fairy tale picture books and who's designs for animations were equally remarkable and innovative. In 1975, a book was published that included his work and people began to appreciate him again. In 1977, some of his friends came forward with 42 paintings- never before seen- held in trust, for a book called, A Thousand and One Nights.
The Scepter : see more of Kay Nielsen's beautiful pastel/watercolor sketches for The Little Mermaid 1941
Golden Age Comic Book Stories Blog : lots of illustrations in color and B&W from Kay Nielsen's picture books.
Thanks, finsbry at flickr (set of KN images)
The Art of Amy Crehore
Posted by Amy Crehore at 7:24 AM