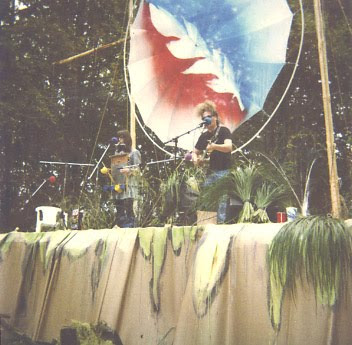 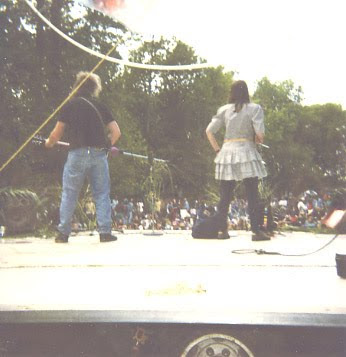 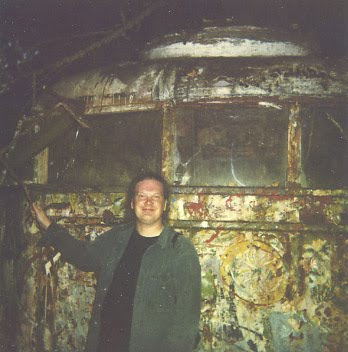 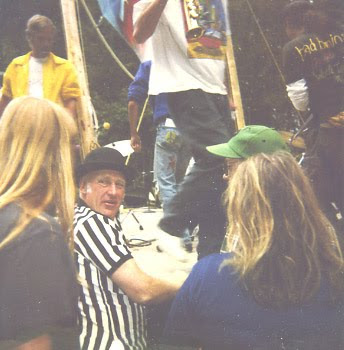 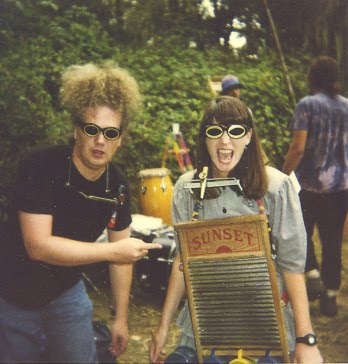 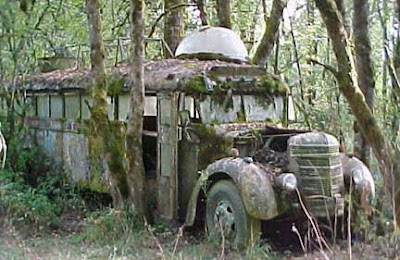 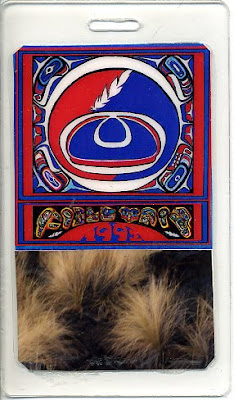 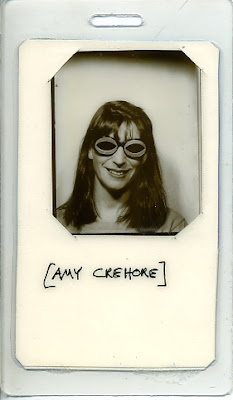 Okay, so Jerry Garcia got sick in August of 1992.The Grateful Dead were supposed to headline an event called "Field Trip" in Veneta, OR, but they cancelled due to illness. So, the musicians that were also supposed to play at the event headed out to Ken Kesey's property. My band, The Hokum Scorchers, played music for 20 minutes on a makeshift stage in a field next to Kesey's house. All the food was gone when we got there, so we played on an empty stomach. I think they paid us $5.
Here's my badge (front and back views above) sporting Kesey's own psychedelic artwork. I believe Gus Van Sant was there that day, too, filming the part where Kesey read his childrens' book on stage (wearing a bear costume).
Unfortunately, Kesey's outfit caught on fire as he was doing his thing. I think I heard him scream, "Turn the cameras off!!". My memory is foggy, but I know that I wore my vintage Foster Grant sunglasses like I always do when we play hokum music. I remember asking Ken Babbs if Robert Stone was there because I had just illustrated a story of his for Esquire magazine. "Nope, he's not here, but Timothy Leary is supposed to show up". I remember knocking my microphone completely off the platform. Ka-Plunk! Everyone in the audience was stoned, so it really didn't matter what anyone did on stage. We walked past an old junker on our way out...it was "Further", the original hippie bus (photo above). Later, we would get to play music on Ken Kesey's float in the annual Eugene parade. He made us do a version of the song "Gloria". It must have been one of his favorites. There is a film of that somewhere...


The Art of Amy Crehore
P.S. I posted this story 3 years ago, but I am posting it again this morning as I head out to see the Eugene Celebration parade. I will always remember riding on that float with Ken Kesey who was dressed in his shaggy bear costume. Standing at the front of the float, he almost hit his head on a tree limb as we made our way down the streets of Eugene, OR. There is now a statue of Kesey in the middle of town. He is reading a book to children.
Posted by Amy Crehore at 8:25 AM

That is so funny!
You had never told that story before. It would be cool to see some of the footage that was shot.

Who took the photos?

I handed my polaroid camera to a friend who was there with one of the other bands. The photos were taken late in the day ... I brightened them up a lot in photoshop. (I remember we had to audition for Kesey at a bar in town a few weeks earlier.) He was sitting smack in front of us on the ground at this concert. Lots of poets and old folk singers were there.
I want to find that film of the parade.

"Gloria"- three cords, a Van Morrison composition and a classic guitar break. What's not to love?

BTW, that bus aged better than anyone else.

Somewhere I have a DVD recorded by my Ex of Kesey's party and the next day out in Harrisburg @ Conde's Lumberyard party. It's a couple of hours long. ;)