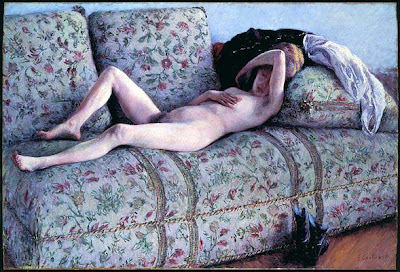 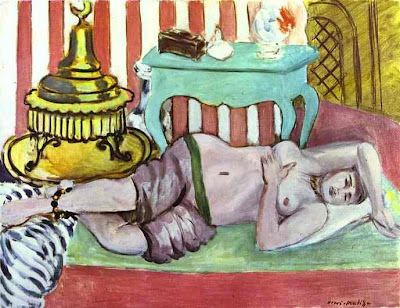 Henri Matisse
Here are two odalisques that have a similiar feel and pose, although they are done by two vastly different artists. Caillebotte's is so naturalistic. Matisse's odaliques are all about patterns and colors. He did dozens of them.
I realize now that the new painting I am working on is an odalisque of sorts. But, it is also much more than that. It is narrative, surreal and imaginary, not posed. And my girl is not asleep.
I will unveil the painting some time this week. I still have some details to finish up. Stay tuned.
Here's an interesting essay: THE ARCHETYPAL FEMALE IN MYTHOLOGY AND RELIGION: THE ANIMA AND THE MOTHER by Dr. Joan Relke (Feb. 17,2007)
"The existence of the anima in the male unconscious is easily attested in mythology and the history of art, both largely the product of male writers and artists. With the anima such an obvious psychological reality in men, one would think that women, if they have as Jung says, a male counterpart in their unconscious, would project male images in the creation of artistic images. But now that women are free to make 'serious' art, the images that appear are rarely male. Instead, a multitude of female images have been born."- an excerpt from Europe's Journal of Psychology
The Art of Amy Crehore
Posted by Amy Crehore at 9:42 AM