Favorite Artist of the Hollywood Stars 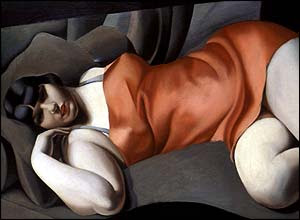 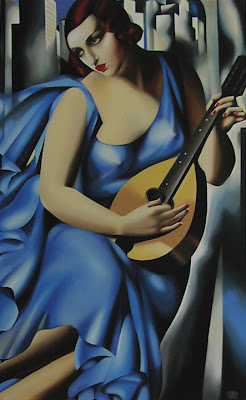 Tamara de Lempicka was a figure painter of massive volumes who also had art deco-cubist tendencies. She was a very skilled painter who invented an unforgettable style. During her day, she was very popular and at one point during the 1930's, she became the favorite painter of the Hollywood stars. She lived in Paris, Beverly Hills and NYC and finally Mexico. "She painted them all, the rich, the successful, the renowned -- the best. And with many she also slept." - this is a quote from her daughter Kizette's book about her, Passion by Design.
In other words, she was a whore. Both with women and with men. I don't know how she found time to be one because she was quite a prolific painter. Her work is a little bit too stylized for my taste, but some of it is pure painting and a new book called, Lempicka by Patrick Bade shows many wonderful works that I have never seen before. She did lots of nudes and nude bathers and groups of figures in complex compositions. She also liked to paint people playing stringed instruments. They are rendered almost like sculptures. Read more about Lempicka, a fascinating woman artist who had a huge influence on graphic arts and interior design: Tricky Micky Art Page
The Art of Amy Crehore
Posted by Amy Crehore at 12:53 PM