Learn a Bit of Trivia That Will Make You Blush

Posted by Amy Crehore at 9:14 AM No comments: 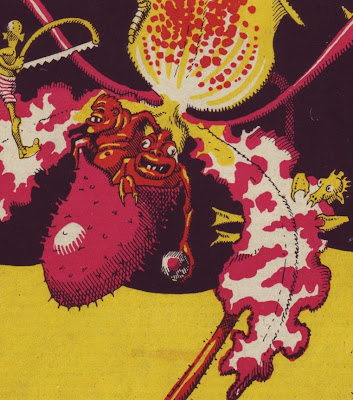 detail from cover of the very first issue of Der Orchideengarten, 1919, Germany
I just got wind of this: one of my favorite blogs is having a "create a bookplate" contest. The prize is a copy of the beautiful book Alfred Kubin: Drawings 1897 - 1909. Submission deadline: 10/14/09. That's only about a week from now.
More information here:
A JOURNEY ROUND MY SKULL
The Art of Amy Crehore
Posted by Amy Crehore at 9:55 AM 2 comments: 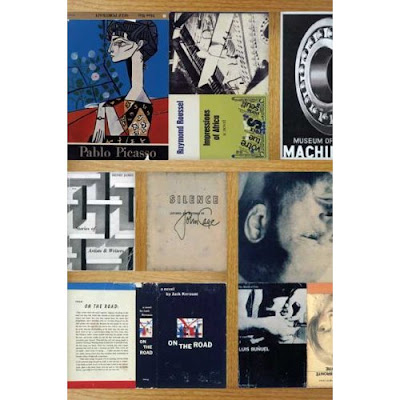 Cover of the new book: "Steve Wolfe on Paper" (Whitney Museum of American Art)
Someone that I used to know in my younger days has a new drawing show at The Whitney Museum of American Art in NYC. How exciting! His name is Steve Wolfe and it sounds like he has been working very hard:
"For over two decades, Steve Wolfe has created objects and drawings of astounding craft and visual presence that investigate the intersections among material culture, intellectual history, and personal and collective memory. Working in the tradition of trompe l’oeil, his pieces often quite literally fool the eye on first inspection: tattered books, worn album covers, and vinyl records appear pristine but these are objects made from modeling paste, screenprints, drawings, and many other media, and they reproduce not just the thing but the individuality an object takes on as it is consumed by one or more individuals."
Whitney Museum Website
This show runs from September 30-November 29, 2009 in NYC. It will also be on view at The Menil Collection, Houston, TX, April 1, 2010- October 31, 2010.
I'll have to buy a copy of the book which is available on amazon or at Whitney gift shop.
(Congratulations to Steve! And thanks to Janet, for letting me know.)
The Art of Amy Crehore
Posted by Amy Crehore at 8:38 AM No comments:

I used to want to play soprano sax like Sidney Bechet. I even bought a vintage one and took lessons. I didn't get very far, but Sidney was my hero for a time. Here's an amazing clip from a 1930 film with Lilian Harvey and Willy Fritsch. Enjoy SIDNEY BECHET AND HIS NEW YORKERS in Berlin 1930. Be warned: there are some crazy monkeys and wild dancers in this YouTube video. This clip is a bit long, but interesting.

Winner of My Contest 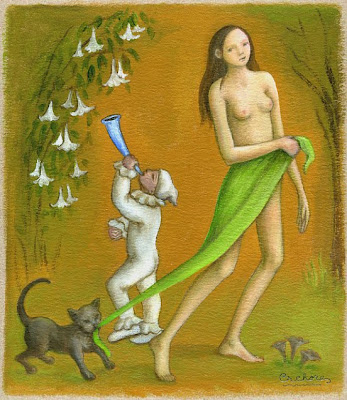 Okay, I have made a decision. It was extremely difficult to choose just one title because there were so many great titles submitted. Some of them made me laugh out loud and some of them made me smile, but in the end, the most intellectual title won the prize. It's a title that I would never have thought up myself in a million years and it's not even a musical title. I'll admit that I had to look up both words. However, since the painting itself has a classical/literary feel to it, I thought that this title was appropriate. The winner of my little painted sketch is dscroggy who came up with the title "Persephone's Phenology". The runner-up is Jim Bradbury who named it "Puss n' Toots". Please write me at amy@amycrehore.com . I will send the runner-up a consolation prize.
Thanks to everyone who participated! Luv ya all. Amy
The Art of Amy Crehore
P.S. Please follow Steve Chasmar's Halloween Countdown 2009 on flickr. He is posting from a hospital bed in Thailand. I know it would make him happy to be able to share his wonderful collection of antique images with you.
Posted by Amy Crehore at 6:27 PM No comments: 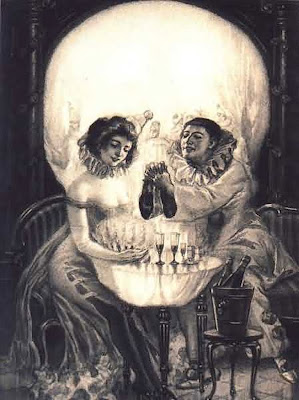 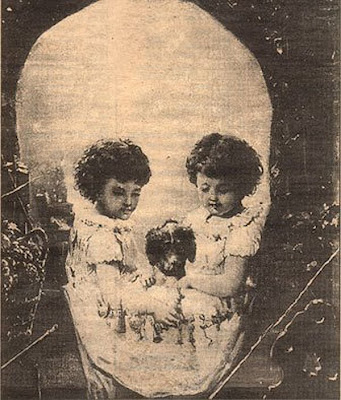 Steve Chasmar's "Halloween in the Time of Cholera" countdown last year was such a treat for all of us. This year he is doing it again! He'll be posting one or more Halloween-themed images every few days to his flickr account:
Halloween Countdown 2009.
DON'T MISS! Steve Chasmar's collections are some of the very best things on flickr! If you haven't seen them, you are truly missing out. He also has a great website called Opium Museum.
The Art of Amy Crehore
Posted by Amy Crehore at 9:56 AM No comments:

Big Hair with Stuff in It 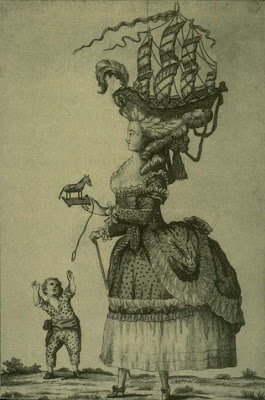 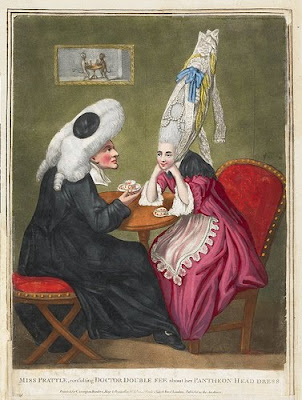 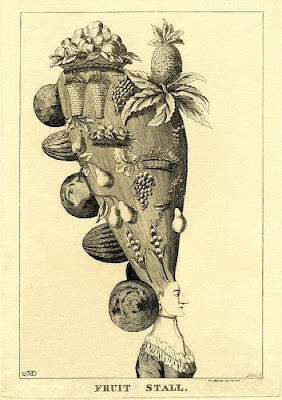 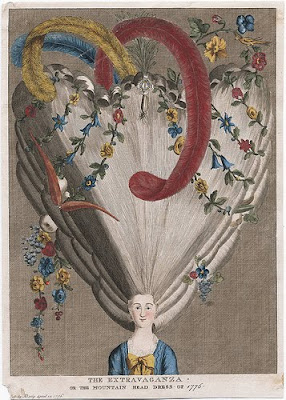 " Big Hair with Stuff in It" is not just a contemporary art movement. It's been around forever.
Enjoy this illustrative art from the late 1700's making fun of women's hair fashions - there is so much more to see on:
BibliOdyssey
P.S. Don't forget about my little contest -to win an oil sketch by me- you have until Sunday, Oct 4, 2009 at noon (pacific time) to come up with a title for my picture: Here's the LINK
I'll be announcing a winner around 6pm Sunday on my blog.
The Art of Amy Crehore
Posted by Amy Crehore at 10:10 AM No comments: