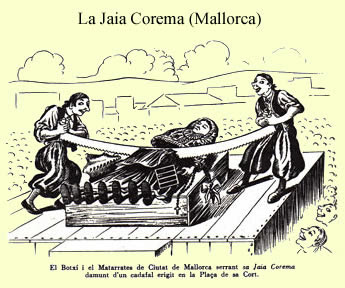 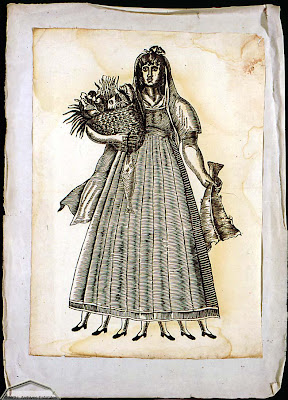 My friend Valerie (who lives in Barcelona) sent me these interesting images, along with this explanation: '"La Vella Quaresma" (Old Lady Lent) is a Catalan tradition. During Carnival week she fights with the King of Carnival (Carnestoltes) and finally wins, so his rule of feasting, and wild celebrations is over and is replaced by order, fasting and calm. She carries two salt codfish and is in charge of making sure children eat fish not meat during the seven weeks of Lent. She has seven legs, one for each week. The tradition was to hang her picture in the house with a sweet attached to each leg, at the end of each week the children pulled off a sweet (and a leg). On the Island of Mallorca, (top illustration) they used to saw an effigy of her in half in a public square midway through Lent and children were threatened that the Sawed Lady would come to take them away if they ate meat!'
The Art of Amy Crehore
Posted by Amy Crehore at 7:30 PM